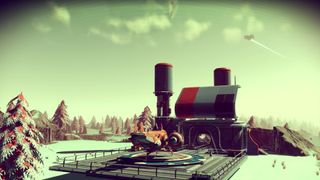 It's only been one day since the release of No Man's Sky and two players have already managed what the game's creator called "incredibly rare" before the game's release.

In the run up to the game's release the game's creator, Sean Murray, claimed that, while it was possible for players to meet in the game, the sheer size of the universe meant that this almost certainly wouldn't happen.

But now just a day after the game's release two players have managed exactly that.

The event occurred when Redditor TheGalacticCactus inadvertently landed on a planet which had been named by another player, Psytokat. Since the game had only been out for a day he reasoned that his fellow player might still be close by, and sent a message to arrange to meet.

But it's here that the story get's a little disappointing. Despite managing to wait at exactly the same landmark in the game, they couldn't see or interact with one another.

Their experience contradicts what Murray has said in the past where he implied that players would be able to meet.

However he has repeatedly described the game as being a single-player experience, and tweeted yesterday, "Please don't go in looking for that experience." The game also does not require a PlayStation Plus subscription to play, which is required for multiplayer titles.

There is hope yet for players looking to have a shared experience, as Murray later hinted that server issues may be preventing the discovery of "cool moments" and "Easter Eggs".

"We want people to be aware they are in a shared universe. We added online features, and some Easter Eggs to create cool moments" he tweeted, before continuing.

"We hope to see those happening... but too many of you are playing right now. More than we could have predicted."