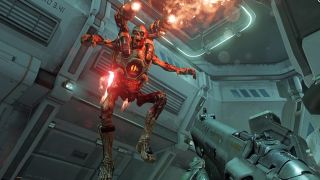 So you want to run Doom with a much faster frame rate? Well the good news is the game now supports Vulkan, a low-overhead graphics API which will put the FPS (frames per second, that is) pedal to the metal.

Vulkan (which was built on AMD's Mantle graphics tech) offers a similar sort of performance boost to Direct X12, but with the added benefit that it's not exclusive to Windows 10, so those on Windows 7/8 can enjoy accelerated frame rates.

You will, of course, need to update Doom with the latest patch, and also download the latest drivers for your AMD or Nvidia graphics card (note that any card which meets Doom's minimum system requirements should be fine running Vulkan – but those owning Nvidia cards with 2GB of video RAM on Windows 7 are out of luck).

AMD's own testing with Doom (running on the 'ultra' preset) and a Radeon RX 480 showed that at 1080p resolution, the Vulkan version of the game benefited from a 27% performance boost, and a 23% boost at 1440p.

Vulkan isn't just about Windows gaming either, as it's platform agnostic so Linux gamers, consoles, and indeed mobile devices can benefit as well.