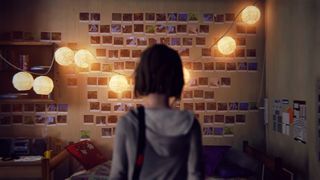 Much has already been written on the brilliant storytelling and heavy themes of Life is Strange, which is unsurprising for a game that tackles loss, suicide and bullying in such a meaningful way. It is, put simply, a game that will provoke a "Holy sh*t" on more than one occasion.

I didn't play Life is Strange when PC gamers were eagerly digesting it piece by piece, instead I held out until I had the time to give it my full attention. That came in the form of a console version (the retail edition is out today) containing all the episodes. "Oh good," I thought, realising I could burn through it in a couple of days, "No waiting around for new episodes to drop."

As it turns out, I would have waited anyway. Kate Gray has already written on the merits of episodic gaming, and I fully agree that Life is Strange is a wonderful demonstration of this. But just as important for digestion, I think, are the moments of contemplation within each chapter.

Life is Strange tackles incredibly tricky themes in a way that makes your actions integral to how these themes play out. At one point, early in the game, you will try to stop someone taking their own life. I can't say that I have ever had to deal with anything as traumatic in reality, as I know some players will have (The developers suggest some support lines for people who have been affected by suicide), but it is a moment that will stay with me.

It was because of these moments that, rather than rush ahead to find out what happens next, I preferred to stop and just think. Think about what had transpired, what might come next, how I could have helped someone if I had said something different. In a game where even small choices carry consequences right through to the last episode, these moments of contemplation feel much-needed.

And the game encourages this by offering many opportunities to just sit and watch the world around you. Often this will cue a montage of camera angles and music, a peaceful retreat between moments of drama and intensity. In fact, one of my favourite moments in Life is Strange occurred in Episode 3 when all I did was lie on a bed next to Chloe and listen to Bright Eyes' Luna.

The rise of indie development has paved the way for more games that celebrate contemplation and slower pacing. Sometimes these are referred to as "zen games", but I think putting them into a genre at all is a tad reductive.

Simply, I am talking about games that reward you for spending time in their worlds and not just pushing forward, inviting you to contemplate an art style, a story, or just the vastness of their worlds. Games like Journey and Never Alone, the latter of which ponders on the preservation of Inuit culture, are among the more obvious examples of this.

Other games are perhaps less so, but just as valid. While I quickly burned through Fallout New Vegas, rushing from one plot point to the next, I spent much more time in Fallout 4 taking in the vast world around me. I spent one day just walking around the Wasteland capturing screenshots of sunsets and some of the game's more pleasing vistas.

Too often I rush through a game, rarely taking the time to admire these amazing worlds that people have spent time building, or to properly digest the stories they're telling.

If I have one resolution this year it's to try and do that a little more. Sometimes that might just be sitting on a bench and watching the birds.