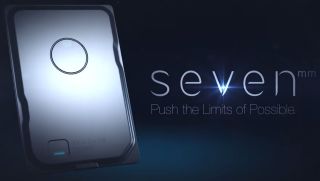 Seagate's Seven is so svelte.

Called Seven, it's the world's thinnest external hard disk drive according to Seagate, and at 7mm (hence the name) it's just a fraction thicker than Apple's iPhone 6 smartphone.

The drive is a 5mm thick, 500GB model that is enclosed in a super-thin 2mm stainless steel enclosure that closely espouses the shape of the hard disk drive.

It's worth noting that Seagate has had a 500GB, 5mm drive in its portfolio since June 2013 but was never a hit because its thickness would require vendors to modify their existing designs (which are compatible with 7mm drives).

Seven will be available later this month in the US with a suggested retail price of $99.99 (about £70, AU$110). No word on global pricing or availability yet.