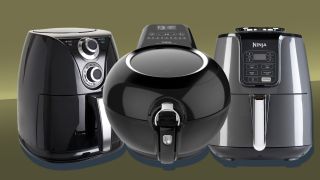 Air fryers are a must-have if you’re looking for healthier, easy ways to cook your favorite foods –  guilt-free chips and roast potatoes anyone? Yet with so many models to choose from, varying wildly in price and size, choosing the best model for your needs can be a little bewildering.

Air fryers are largely sold with pull-out baskets or bowls, and with either digital or manual controls, while some come with separate compartments that allow you to cook multiple foods at once.

Bowl air fryers, like those in Tefal’s Actifry range, tend to offer greater capacities, and have glass tops that let you keep an eye on your meal. This bowl design also means the cooking juices tend to remain in the air fryer and in contact with the food.

Basket air fryers are usually healthier because they funnel the juices, and fat, away from the food, but as these baskets are on runners and tuck away inside the fryer, you can’t check on your food without opening it and letting in cold air.

Both air fryer types work in much the same way as traditional fan ovens. Hot air is generated in the basket or bowl, and a fan distributes this air to cook the food evenly. This means air fryers can be used to roast or bake pretty much anything you can cook in a regular oven, space permitting.

Speaking of space, other points to consider when choosing an air fryer are capacity, the machine’s size and what you’re getting for the price. The largest air fryers, which come in at around 6 liters, are perfect for feeding a family of four, but air fryers with a capacity as small as 2.5 liters can still cook a decent amount of food.

You can pay up to $330 / £250 for popular air fryers, but as our tests show, this doesn’t always guarantee the best results.

We've spent a month testing how well air fryers cook chips and chicken wings, how easy they are to use, how loud their fans are, and their general day-to-day convenience, to help you find the perfect machine for a simpler, healthier air-frying life.

A budget air fryer that punches well above its weight

Wilko is an unsung hero in the world of kitchen appliances, consistently turning out quality products at bargain prices – its slow cooker is the best we’ve used, and its blender ranks highly, and its air fryer is no exception. For £40 you get a well-designed, easy-to-use machine that makes crispy chips with fluffy centres and tasty chicken wings with moreish skin and moist meat.

It doesn’t offer as many programs and settings as some of its more expensive rivals, instead opting for a manual timer that gently ticks as it counts down, and a large temperature dial. The timer only runs for 30 minutes, which is half the time of most other air fryers on the market, but its top temperature matches the majority of its rivals, heating up to 200C. The lack of digital controls is one of the sacrifices you make for the Wilko air fryer’s cheaper price, another is the fact it becomes quite hot to the touch during cooking. On the plus side, the manual dials do make the Wilko incredibly easy to use.

Design-wise, it's relatively compact, even more so when you consider that its small design houses a large 4L bowl with a basket attachment. Its glossy black casing means it will blend in easily on a countertop, while it could be stored in a cupboard if space is at a premium or it won’t be used regularly.

By making better-tasting chips and chicken wings than we’ve ever managed in our conventional oven, Tefal’s Actifry Genius XL is our king of air frying. The chips tasted so good we could have been convinced they were from a chip shop, and the chicken was moist, while its skin was crispy and retained loads of flavour. It fails to take the top spot in our list of best air fryers, however, because its price, bulky size and noisy fan detract from this cooking prowess.

It has a deeper, flatter shape rather than the tall design of its rivals. The benefits of this are that it fits easily on worktops under kitchen cupboards and allows for a glass 'window' on the top of the machine that lets you keep an eye on what you’re cooking. The heat is also generated at the rear of the machine, meaning it doesn’t get too hot to touch. The downside to this design is that it won’t fit comfortably in a cupboard because of its depth.

The improved taste of its chips and chicken wings is largely down to its bowl design and rotating paddle. Whereas the Wilko gives you the option to use the bowl or basket, the only option with the Tefal is to let the food cook in its own juices, albeit as it's moved around the bowl by the detachable paddle. This increases the fat content, because it doesn’t funnel it away, but it also boosts the overall taste, and means you don’t have to clean a separate fat tray.

Ninja’s industrial-looking beast of a machine is highly versatile, but highly priced

The Ninja Foodi is technically classified as a multi-cooker because, beyond air frying, it lets you bake, roast, sauté and sear, and it also triples up as a slow cooker and pressure cooker. It also has one of the quietest fans on any air fryer we’ve used. As might be expected for such a versatile, well-built machine, however, it’s an absolute beast, taking up a significant chunk of space on a worktop and looking somewhat industrial (read: ugly) in its design.

A major plus side to this is that it offers a huge capacity, enough to easily cook food to feed a large family or party guests, and the Ninja Foodi can be used with a bowl or a basket, as well as for baking cakes or multiple items thanks to a detachable grill rack. The downside is that the multiple settings, accessories, and the fact there are two different lids to choose from, depending on the function being used, makes it a complex machine to get to grips with.

For the purposes of this group test we only tested the Foodi's air fryer function. It made delicious chicken, yet disappointed by turning out overcooked chips that were crispy on the outside but lacked the fluffy interior of chips from its rivals. It comes with an hour-long timer, and offers the highest maximum temperature of the fryers on test at 210C.

We've also used the baking and roasting tool, as well as the slow cooker function, and while its performance in those areas isn't strictly relevant here, it’s an impressive piece of kit overall – and for the price, it should be.

The Goldilocks of air fryers that offers something for everyone

If the Ninja Foodi offers too much, the manual controls of the Wilko offer too little, and the Tefal isn’t healthy enough for you, the Princess Digital Family Aerofryer could be just right. Out of all the models in this list, the Princess hits a sweet spot by offering a wide range of digital settings via its touchscreen without being overly complicated. It's also available in two sizes – 3.2L and 5.2L – and has a one-hour maximum timer setting.

We tested the larger of the two models and, despite offering a similar capacity to the bulky Swan, the Princess was a better fit for our kitchen, both in terms of size – it’s marginally more compact than the Swan – and with its sleek black design. It wasn’t the quietest air fryer we’ve used, but nor was it the loudest, and it also scored highly for not getting too hot to the touch during cooking.

The Princess Digital’s chips weren’t as fluffy as others in this list, but it did give them a tasty skin. Similarly, its chicken was crispy on the outside, but a little dry on the inside.

The Swan Manual 5L Air Fryer is the quietest we’ve tested and, thanks to having the same manual controls as the Wilko air fryer, it’s similarly easy to use. The shape and design of Swan’s fryer is almost identical to the Wilko model, too, and it shares the same 30-minute timer; in fact, little separates the specs of the two machines, so you’re effectively paying just a bit more for the Swan's extra litre of capacity and a couple of design tweaks.

For this higher price we expected an improvement on the Wilko’s cooking capabilities, but the Swan failed to match its rival’s performance. Some of its chips were delicious, others were soggy. It was more successful in cooking the chicken wings, but, again, inconsistency let it down, with some of the wings being among the best we tasted, while others were dry and lacked a crispy skin. This is a shame, because the Swan is clearly capable of great things – it’s just a little hit and miss.

The other main difference between the two models is that the Swan is larger, on account of that extra litre of capacity, and the version we tested was bright red compared to Wilko’s classic black case – so it may not suit all kitchens, or tastes.

If you're a fan of the design, however, and especially if you don’t think the Wilko’s 4-litre capacity is enough for your needs, the Swan still represents good value when it comes to performance versus price. It’s also available in black and cream, as well as a digital version, yet the latter two are currently showing out of stock on a number of websites.