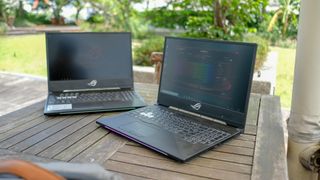 Under the hood, Asus has also upgraded both the Scar and Hero Edition with 8th generation Intel Coffee Lake processors – starting with an Intel Core i5-8300H that you can upgrade to a hexa-core Intel Core i7- 8750H. On the graphics side, both machines start with a Nvidia GTX 1060 (6GB GDDR5 VRAM), but only the Scar II can be optioned with a Nvidia GTX 1070 (8GB GDRR5 VRAM).

Onboard is also a minimum of 16GB of DDR4 RAM and an 128GB SSD, though, both can be upgraded to 32GB and 512GB, respectively. Either a traditional 1TB hard drive or 1TB SSHD hybrid hard drive, depending on your preference and SKU, round out the configuration options here.

The Asus ROG Phone was also announced at Computex 2018 - to find out more about it, watch our hands-on video below: