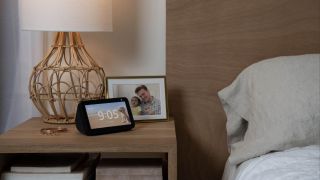 Amazon has announced the Amazon Echo Show 5, the latest addition to the Echo family.

Confusingly, this isn't the fifth generation of Amazon's popular Alexa-powered Echo Show smart display – it's actually the third generation, with its name referring to its diminutive 5.5-inch screen.

Amazon says that the new smart display is available to pre-order now, and will start shipping in the US, United Kingdom, Germany, France, Italy, Spain, Japan, Canada, New Zealand, and Australia in June, and in India in July.

If you preorder two Echo Show 5s  from Amazon, you can get a $30 / £25 discount in the US and the UK respectively. Unfortunately the same deal doesn't seem to be available in Australia.

At just over half the size of its predecessor, the compact new smart display is designed to fit comfortably in tight spaces, as Tom Taylor, Senior Vice President, Amazon Alexa explains:

“The compact form factor is perfect for a bedside table or desk, plus it has a camera shutter for added peace of mind, and new Alexa privacy features for even more control.”

For those concerned about privacy, the inclusion of a physical shutter on the Echo Show 5's HD camera should offer some reassurance that Alexa won't spy on you from your bedside table.

As well as that, Amazon says the new Echo Show 5 includes a "microphone/camera off button that electronically disconnects both the microphone and camera, and a clear visual indicator that shows when audio or video is streaming to the cloud".

Amazon is also introducing easy ways to delete your voice recordings on all Alexa-enabled devices. From now on, you can simply say, “Alexa, delete everything I said today” and the respective recordings will be deleted.

Amazon says that customers will also soon be able to "delete their last request by saying “Alexa, delete what I just said”. The company's emphasis on privacy is likely in response to reports that Amazon employees could be listening to recorded Alexa conversations.

According to Amazon, the Echo Show 5's small form factor doesn't mean it packs less of an audiovisual punch than its larger predecessor, which impressed us with its big, bright, responsive touch screen.

Depending on where you are in the world, you can currently access TV and video through the Echo Show from the likes of Prime Video, NBC, BBC iPlayer, YouTube, and more – some of these are available via Alexa skills, while others like YouTube will need to be accessed via the Show's browser.

Amazon is also introducing a new integration with wikiHow that "allows you to access hundreds of how-to videos by voice", so you can just ask Alexa to "show you how to open a tight jar, clean a cast iron skillet, make a paper crane, or solve a Rubik’s Cube".

While it's not in use, you can display clock faces or your own photo on the home screen. If most of your photos are on Facebook you can also link it up to you account to play a slideshow of your photos.

It should sound great too, if it delivers the "rich and full sound" Amazon promises, whether you're watching music videos on Vevo, or playing songs on Amazon Music, Spotify, Apple Music, or Pandora.

Hopefully Amazon has addressed the bass-heavy presentation we found in the previous Echo Show, which we found a little off-putting when it came to spoken word content like podcasts or radio shows.

Control for the smart home

Amazon has also announced a new smart home dashboard that's available on "all Echo Show devices", which is designed to give more control over your smart home gadgets.

Now, as well as giving Alexa voice commands, you can do things like turning your lights off by using on-screen controls. Amazon says you can also "view your smart home camera feed and thermostats, access recently used devices, and manage smart devices by group."

As ever with Amazon Echo products, if you choose to share your contacts book with Alexa, you can use the Echo Show 5 to place calls to mobiles and landlines – a feature which will have rolled out for UK users as well as US Echo owners by the time the Echo Show 5 hits store shelves.

Like previous Echo Show devices, the Echo Show 5 is compatible with a range of smart home gadgets including the Arlo baby camera and Ring doorbell cameras.

Amazon seems to be pushing the idea that consumers would have multiple Echo devices in the home rather than opting for just one, saying that, "with Echo Show 5 in multiple rooms of your home, you can easily drop in on another room or make an announcement that dinner is ready."

Whether consumers are likely to spend $90 on every room, kitting each one out with an Echo Show 5 remains to be seen,  but it could be a useful addition if you want to bring Alexa to rooms that are tight on space.