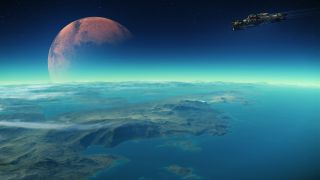 PC Gamer’s annual PC Gaming Show has a bit of a shaky history, often dragging on for hours, filled with unnecessary skits and tedious interviews. At E3 2018, however, it seems like PC Gamer has listened to criticism, because it was shorter, more concise and filled with exciting PC games.

As passionate PC gamers ourselves, we were ecstatic to see all the best PC games that will be gracing our Steam accounts over the coming year or so. And, to make sure you’re in the know as well, we listed the 10 most exciting PC games we spotted at the PC Gaming Show 2018. Enjoy!

Brought to you by Coffee Stain studios, Satisfactory is a factory building sim, which puts you on an alien planet to build an autonomous factory. You’ll start off with a relatively simple setup with just a few machines, but you’ll eventually have a gigantic and complex factory. You’ll power the building of this factory by collecting resources from the surrounding area.

Where Satisfactory diverges from your average building sim game is the first-person perspective – the developer wants players to feel like they’re the ones building the factory. If you want to get your hands on Satisfactory you can check out the game’s website here, and it should be entering a closed alpha in the coming months.

While we didn’t see much of it at the PC Gaming Show, Neo Cab – with its unique art style and premise – definitely caught our attention. Neo Cab will put you in the shoes of the last human cab driver in a city full of automated cars.

You’ll pick up customers and speak with them in a deeply emotional narrative, where you’ll try to find a friend that has mysteriously vanished. If you’re going to keep your job long enough to find them – you’ll need to keep your wits about you.

We don’t know much beyond that, but it was enough to pique our interest.

It wouldn’t be E3 2018 without including at least one Battle Royale game – the PC Gaming Show featured three –  and Maverick’s Proving Grounds aims to separate itself from the pack by having gigantic maps with up to 400 concurrent players.

Unlike something like Fortnite, Maverick’s Proving Grounds has a very dark and grimy aesthetic. It will also see players leave tracks in the environment, meaning that paying close attention to your environment can lead to victory. It looks like it will be a much deeper, more complex Battle Royale game. If this sounds appealing to you, head over to the game’s website and sign up for the beta.

Here at TechRadar, we’re huge fans of Starbreeze, and now that we’ve seen Overkill’s take on the Walking Dead we couldn’t be happier.

Besides Telltale’s Walking Dead (which was also at this show), the Walking Dead doesn’t exactly have a great track record in gaming. We’re hoping that will change here.

The Walking Dead, rather than a point and click adventure, seems to be kind of a combination of Left 4 Dead and the recently-released Warhammer: Vermintide 2. It’s a 4-player co-op survival game, and each of the 4 playable characters have unique and necessary abilities, and will have long-term progression that will unlock as you play.

We can’t wait until its November 6 release date to see if Overkill’s The Walking Dead breaks the franchise’s cursed gaming history.

Hailing from legendary sci-fi RTS visionaries Stardock, Star Control: Origins combines elements of games like Stellaris with on-planet exploration. And, while this game won’t see you exploring the planet on foot, you’ll be able to drive around the surface to discover all kinds of alien life forms.

Unlike other similar games, however, Star Control: Origins appears to have a much more lighthearted aesthetic and narrative, with a bit of a dark side hiding underneath. And, even if you don’t like the story you can make your own with full mod support. There’s even local multiplayer, if that’s something you’re into.

You can preorder it today ahead of its September 20 release date on Steam or GOG.

The Sinking City is a third person, open-world, action investigation game set in a Lovecraftian world. That sentence alone was enough to sell us on it. Taking place in a flooded city in Massachusetts, the Sinking City will put you among a population that is living in perpetual fear of the supernatural monsters and forces that have taken over.

The Sinking City will also feature a sanity meter, similar to Amnesia: Dark Descent, where you’ll start hallucinating – seeing and hearing things that you may not otherwise. It’s not clear exactly how this mechanic will be implemented, but seeing how this game is so rooted in the Lovecraftian mythos, we’re sure it’s going to be brilliantly terrifying.

We don’t need to introduce Warframe – it’s one of the best free games you can play today. And, ever since the gigantic Eidolon expansion in 2017, Warframe has put its sights on games like Destiny 2 and The Division – and honestly, it’s winning.

Warframe: The Sacrifice continues this tradition by offering an epic cinematic quest. And, best of all? It releases at the end of the week. On top of this new cinematic quest, Warframe: The Sacrifice will give players access to a new sword-wielding Umbra Warframe, new UI skins and a ton of new cosmetics. We can’t wait to spend even more time in Warframe when this update goes live.

We’ve seen games where you have to survive shark attacks, we’ve seen games that are action RPGs, but we’ve never seen the two combined. Coming from the mind behind the original Killing Floor mod and Depth, Maneater will put you in the fins of a shark.

Maneater is an open-world action RPG that will have you terrorizing the coasts as a gigantic Bull Shark. And, it’s not just there to laugh at, either – Maneater features a deep stat and abilities system, so that you can customize just how you’ll terrorize the coast. And, believe it or not, there will be a full revenge-themed story. We have to say, we’re definitely intrigued by this one – we’ve never seen anything like it.

Insomniac games is perhaps best known for its iconic PlayStation series, Ratchet & Clank, but with Stormland it's coming to PC. Stormland is an Action game, played in VR, which will see you control an android gardener on a tropical island, trying to save your friends. You’ll be able to fly around, fight and interact with your environment.

Just going off of first impressions, Insomniac’s Stormland looks like what we’ve been waiting for from a VR game – free motion, AAA gaming and robust combat. Insomniac aims to use the motion control unique to VR to enhance the way you interact with the world.

We don’t know much more about the game at this point, but one thing is for sure – we can’t wait to get our hands on Stormland.

Look, we know that this game has been shown off what feels like hundreds of times at this point, but we still can’t get over just how cool it looks. Cloud Imperium was back at this year’s PC Gaming Show to show off more gameplay and to announce Alpha 32. That’s right, its the 32nd alpha build. We’re starting to get the feeling that this game will never get a full release, but in a lot of ways – it’s the ultimate PC game.

The combat shown of in Cloud Imperium’s trailer looked extremely slick – but, we just don’t know if we’ll get a chance to play this game before we start collecting social security. Regardless of whenever it’ll eventually release, we can’t wait to get our hands on the final release of Star Citizen.