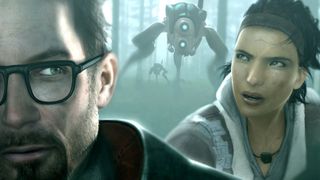 If you're a PC gamer, you'll be aware of a little phenomenon known as "Valve Time" – the mysterious, black-hole like time sink that seems to occur around the release dates of the PC gaming software house's big titles.

However, the long-awaited, Half-Life: Alyx, a new virtual reality game set in the much-lauded Half-Life universe is, surprisingly, "done" and on track for its initial release date.

Valve has slotted Half-Life: Alyx in for a March 2020 release date, and (in a Reddit Ask Me Anything session) Valve's obin Walker, Jamaal Bradley, David Feise, Greg Coomer, Corey Peters, Erik Wolpaw, Tristan Reidford, Chris Remo, Jake Rodkin, and Kaci Aitchison Boyle stated that that was all on track.

"With the exception of some tweaks to the absolute final scene," the Valve team explained, "the game is done. Lots of us at Valve, as well as playtesters, have played through the entire game multiple times."

Stating that it "let the Valve Time happen before we announced the game", the team is "confident we'll hit our intended release."

As for new information on the game itself? That was less readily available, though the team did share that all weapons would be usable one-handed (steadied with your free hand), and that as much influence has come from the AI of Half-Life 1 as Half-Life 2.

The team also promised new gameplay trailers would land ahead of the March release, which would go into more depth around "VR-specific elements" such as movement and control options.

In the meantime, all existing Half-Life games are available to download for free from Valve's Steam service. You know what to do.