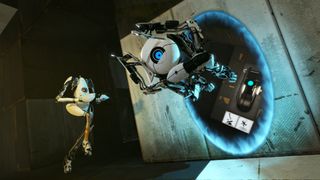 Before it created and released Portal 2, (which we've named one of the 10 best PC games of the decade), Valve was working on an experimental prequel to Portal, known as F-Stop, which was eventually cancelled. Now, more than a decade after it was abandoned, F-Stop has come into public view thanks to a documentary series created by indie developer, LunchHouse Software.

The video series is titled Exposure and its first short episode finally allows us to take a look at F-Stop’s gameplay and its relatively unusual central camera mechanic.

As the documentary shows, the camera and its polaroids allow players to manipulate the position and scale of objects in the game world in order to solve environmental puzzles. In one instance, the player is able to take a picture of a ceiling fan and move it onto the floor, which then enables them to propel themselves onto a higher level and into another area. In another, they're able to attach balloons to a box and make it float away.

LunchHouse states that it’s using Valve’s original F-Stop code and that the footage is being shared with the permission of Valve but LunchHouse's long-term plans for the code are unclear.

At the moment, the indie developer only intends Exposure to be a video series (or an “archeological journal”) rather than a game in its own right, but the studio’s Tristan Halcomb has said on Twitter that it's “currently trying to gauge interest in Exposure to see what opportunities are available in the future.”

We felt we needed to further clarify that. As of now, it's simply a video series. We're currently trying to gauge interest in Exposure to see what opportunities are available in future.December 22, 2019

In terms of its own games, LunchHouse also appears to be working on a physics-based puzzle game titled Punt.

At the moment, there’s only one episode of Exposure available to watch but LunchHouse has promised to share more “in the near future”.