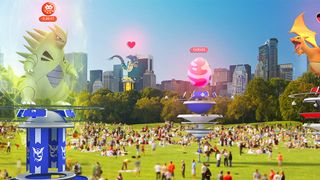 Earlier this year, Niantic announced its Wayfarer Tool for Pokémon Go which would finally allow players to have some influence on key points on the game’s map.

The tool's various features have been steadily rolling out to players in limited numbers; however, Niantic has been forced to suspend its recently-launched Gym and PokéStops contributions system due to “overwhelming response” from players.

It almost takes you back to those early days of Pokémon Go in 2016, when the game’s servers couldn’t quite keep up with the amount of player demand. This time, however, Niantic is getting ahead of the issue and acting first by disabling the contributions system to “avoid stability issues”.

Trainers, due to overwhelming response, we are disabling PokéStop and Gym contributions to avoid stability issues. We'll provide an update when it's available again, thanks for your understanding. https://t.co/8ssOKcnE83December 26, 2019

If you’ve been away from Pokémon Go for a while, or you missed the announcement with all the festive distractions, Niantic’s Wayfarer Tool is part of Niantic’s efforts to improve the Pokémon Go experience.

The wider idea of the Wayfarer Tool is that it allows players (currently only those over level 40 in Pokémon Go) to nominate and review new locations for PokéStops and Gyms as well as make edits to existing ones. The hope is that allowing community contributions will encourage players to get out and explore while the review and improvements system will keep locations and information accurate and informative.

The contributions system which has been disabled allows players over level 40 to make suggestions for changes to current locations. The changes that can be made include titles, descriptions and photos. Nominations for new locations, however, can still be submitted by players.

Niantic has made it clear that PokéStop and Gym contributions won’t be offline forever but it hasn’t given any indication as to when the tool will be fully restored. The only thing it’s said is that there will be an update on its social media channels when things are up and running again.

In the meantime, Pokémon Go's Holiday event is running from now until the new year, with special festive Pokémon to catch and bonuses to enjoy.