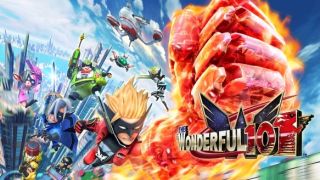 The developer behind titles such as Bayonetta and Nier: Automata, PlatinumGames, is reportedly preparing to announce a Kickstarter to bring its 2013 Wii U title The Wonderful 101 to the Nintendo Switch.

The rumors that Platinum is even thinking about The Wonderful 101 began when the studio posted a photo of Director Hideki Kamiya to Twitter. In the photo Kamiya is flanked by a monitor which reads 1:01 and a Nintendo Switch.

This isn’t a whole lot on its own but the photo was then followed up by a video from GameXplain which reports that the studio is planning to announce a Kickstarter to fund porting the game to Nintendo Switch as well as PS4. There are even suggestions that an Xbox One port is part of the dream.

Scenes from the PG office! Who's that photobombing Hideki Kamiya? pic.twitter.com/D70oalUTKoJanuary 31, 2020

GameXplain’s report was given more credence by Liam Robertson of Did You Know Gaming? who tweeted to say that it’s true, adding that publishers weren't interested.

Kickstarter thing for TW101 is true. I waited for Platinum to announce it on their terms. The reveal was set for Monday.February 1, 2020

We won’t know for sure that this is more than a rumor, however, until PlatinumGames makes some kind of official announcement which, it’s being reported, is due in the coming days.

If these reports do prove to be true, this would be PlatinumGames’ first attempt at self-publishing.

It’d make sense that the developer is hoping to take the less risky approach of using Kickstarter to gauge interest in a port of The Wonderful 101, especially if it's true that publishers weren't interested. Like many titles released exclusively on Wii U, The Wonderful 101 languished somewhat due to the console’s lack of success. If there’s enough interest in it, the game could have a more fruitful second life on other platforms.