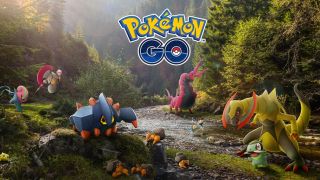 Pokémon Go is getting off to a strong start in 2020 with a big update that introduces new Pokémon as well as a new mechanic: Trade Evolution.

Although it’s just being introduced to Pokémon Go, Trade Evolution is already a fairly established mechanic in the mainline Pokémon games. Essentially, it means that trading eligible Pokémon will reduce the amount of Candy needed to evolve them.

This is a pretty great mechanic to take advantage of if you still haven’t been able to collect the large amount of Candy required to evolve Pokémon like Machoke and Haunter.

The number of Pokémon that benefit from Trade Evolution in Go isn’t expansive but at the moment it includes Kadabra, Machoke, Graveler, and Haunter as well as some of the new Unova additions Boldore, Gurdurr, Karrablast, and Shelmet. If you’ve previously received any of the eligible Pokémon through a trade prior to this update don’t worry; they retroactively qualify.

Speaking of new Unova Pokémon, there’s a large number of the Generation 5 locals coming to the game. Now players will have the chance to encounter and catch Unova favorites like Boldore, Roggenrola, Rumple, Karrablast, Dwebble, Joltik, Shelmet and Trubbish in the wild. Others, like Venipede, Temple, Tirtouga, Archen and Axew will hatch from eggs, while Timburr will be appearing in one star Raids.

Some other new Pokémon in the game will be region exclusive. Players in North America, South America, and Africa will now be able to encounter the red fighting-type Pokémon Throh, as well as hatch it from 10 km eggs. Players in Europe, Asia, and Australia, on the other hand, will get Throh’s blue counterpart Sawk.

In addition, those living in the Southern United States, Mexico, Central America, the Caribbean, and South America will see grass-type Maractus begin to appear. Egypt and Greece, meanwhile, will see the Psychic Flying-type Sigilyph.

The final and least significant divide is between the Eastern and Western hemispheres, the former of which is getting the red-striped form of the water Pokémon Basculin, while the latter gets the blue-striped form.

After a stellar 2019, according to Sensor Tower, Niantic and Pokémon Go show no signs of slowing down in 2020.