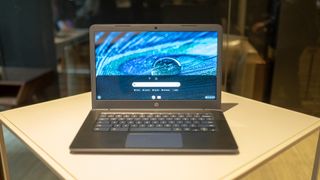 HP almost certainly needs no introduction, but in case it has somehow slipped your mind as to what this company does, it makes a whole ton of PCs (and printers). In fact, HP is the second biggest PC manufacturer in the world (behind Lenovo, and very close behind for that matter).

So as you’d expect, HP makes lots of different desktops and laptops, and Chromebooks are a part of the latter equation. Here we are looking at the fifth-generation HP Chromebook 14, which as the name suggests is a 14-inch notebook.

As with many Chromebooks, the idea here is to produce a very affordable laptop. That said, the HP Chromebook 14 does come in a number of different variants, and while the cheapest is definitely budget-priced, you can spec up a custom machine which exacts a more (lower) mid-range toll on your wallet.

To sum up the spec variations as succinctly as possible, the main points of difference are a choice of two displays, and a choice of CPUs (as well as the usual options on memory or storage). With the display, you can either have a 1,366 x 768-resolution screen, or a sharper Full HD panel (and there are touchscreen or non-touch versions of both).

On the processor front, the choice is between two different Intel Celeron chips, one of which is dual-core, the other quad-core. While Celeron CPUs might represent the bottom of Intel’s range, in Chromebooks, they are still plenty powerful enough to get the job done – and you can always go for the quad-core if you need a bit more grunt. Incidentally, HP also used to make 14-inch Celeron-powered Windows laptops – and not just Chromebooks – but these models seem to have been phased out (although you might still find a refurb or similar kicking about in some corner of the web).

Anyhow, let’s cut to the chase – is the HP Chromebook 14 G5 worth buying? While we haven’t reviewed this Celeron-powered model, we have taken the version with an AMD CPU for a hands-on spin, and we were impressed. So let’s take what we know from our experience with that model and apply it to the new Chromebook 14 with a Celeron engine, using our expert notebook knowledge to paint a clearer picture of whether this particular machine is a good value proposition.

Bear in mind, of course, that this could become an even better value proposition if a chunky Black Friday discount happens to be applied to the HP Chromebook 14. So keep tabs on our best Black Friday laptop deals page which is constantly updated with all the most compelling bargains on the boil.

The bottom line: HP’s Chromebook 14 offers a great range of options, and if you pick carefully, you’ll get an excellent budget laptop. It’s powerful enough, and the Full HD IPS display is good relative to this price bracket, plus you get impressive battery life to boot.

HP Chromebook 14 G5: everything you need to know

HP’s Chromebook 14 is a sterling choice for anyone wanting a cheap laptop, and represents a good pick for cash-strapped students. It is, of course, a Chromebook, and while these streamlined machines have a lot of benefits – particularly around pricing, as is the case here – they are distinctly different from Windows notebooks (for more on this subject, check out our discussion of whether or not a Chromebook might be suitable for your particular needs).

As we’ve already mentioned, one of the plus points with this laptop is that HP offers a customizable version, allowing you to specify a particular hardware configuration, and speccing up the HP Chromebook 14 G5 can help deal with its shortcomings. So what are the main positives, and the potential pitfalls, to look out for here?

Processor: There’s a choice of either a dual-core Intel Celeron N3350, or a quad-core Celeron N3450. In all honesty, the former processor will be fine for most Chromebook users, but if you do want more power for the likes of more demanding tasks (or multitasking), at least the option is there.

Display: This represents a bigger difference than the CPU, with the Full HD display being considerably better than the standard model. The basic 1,366 x 768-resolution panel isn’t a disaster, but it’s only so-so, and if you want to watch, say, movies with any real impact, you’re much better off going with the Full HD screen. The latter is a much sharper display, and also an IPS panel for superior colors and viewing angles. Don’t forget you can also specify a touchscreen (on either display) if you want.

Build quality: Don’t expect too much here. This is a budget product, and it looks and feels this way. The Chromebook 14 G5 is pretty basic in its appearance, and has a plastic chassis, but this isn’t really surprising at the low-end of the market. However, the build quality is passable and robust enough.

Connectivity: HP has included a good number of ports considering this is a value-oriented machine. You get four USB ports, two of which are Type-C. There’s also 802.11ac 2x2 Wi-Fi on-board.

Input peripherals: While the touchpad is okay, the keyboard is a bit shaky in terms of the quality on offer. The keys feel a bit mushy, so it’s not very satisfying to type on. On a slightly more positive note, at least a backlit keyboard is available as an option here.

Battery: Battery longevity is good, so that’s a definite win for HP. It’s also worth noting that this laptop is passively cooled, meaning there’s no fan needed, so it’s therefore silent when running.

Conclusion: HP has produced a likeable Chromebook with the G5, which generally speaking offers quite a lot for the affordable asking price, and it compares well to similar budget notebooks. We’d advise avoiding the very cheapest models if possible, and springing for the Full HD display, which can still be had at very palatable prices. Also steer clear of the models with only 16GB storage, ideally, and at least plump for 32GB. Choosing with a little bit of care will get you a really quite impressive Chromebook, for not a lot of money. Although the bottom-end models are still handy to have there as an option for those who want to do the absolute minimal damage to their wallet.