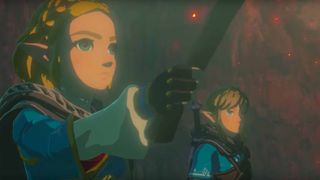 According to leaker Sabi (via wccftech), Breath of the Wild 2 is due for release in 2020. But, as Sabi points out, "Zelda release dates are historically delayed, internally or publicly".

I would tell you Botw2 is planned to release in 2020, but Zelda release dates are historically delayed, internally or publicly LOLNovember 12, 2019

All aboard the hype train

While it's always worth taking rumors with a big pinch of salt, Sabi is a pretty reliable leaker. The Twitter user leaked most of the big announcements from E3 2019 before they happened – reportedly even earning himself a cease and desist order from Nintendo.

We already knew Breath of the Wild 2 was on the way, as it was announced by Nintendo at E3 2019, but we didn't really have an idea when – until now.

Nintendo hasn't shared much information other than the trailer and a few sparse comments, but the trailer revealed at E3 did close with a line stating that the Breath of the Wild sequel was "in development".

A 2020 release date is sooner than we thought but, as Sabi points out, it's likely we'll see delays – so late 2020 may be a more precise estimate.