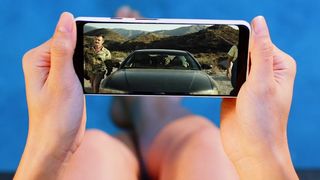 These are busy times in the TV streaming world. While Netflix, Amazon Prime Video and Hulu had the market more or less sewn up three months ago, they've had to face up to new competition in the form of Apple TV Plus and Disney Plus – and they're soon to be joined by NBC's Peacock and HBO Max.

There's one new player on the scene that promises to be very different to the rest, however. Quibi is threatening to shake up the market by doing things its own way, making all of its content exclusively for mobile devices. It's backed by huge amounts of cash, has Hollywood royalty like Steven Spielberg and Guillermo del Toro involved, and promises to bring some exciting technological developments to the table. But what can we expect from Quibi when it launches in the US this April? Below, we'll talk you through what we know.

Quibi is set to launch on April 6, 2020 in the US, the same month as NBC's new Peacock streaming service lands, and a month ahead of HBO Max's May debut – a busy few weeks in the ever-more-competitive streaming wars. Quibi is taking 'insider' sign-ups now.

Quibi price: how much the two tiers cost

Both tiers seem to be competitive when compared to Quibi's streaming rivals – Disney Plus costs $6.99 per month in the US, while Netflix's standard option is $12.99 and HBO Max will set you back $14.99. Though whether it amounts to value for money will ultimately depend on the content on offer.

Why Quibi is different to other streaming services

We've become accustomed to having the option of watching shows from Netflix, Amazon Prime Video and other streaming services on our phones, but that was always just one the many ways to view. With Quibi content, mobile devices are the only place you can watch – quite a contrast to Martin Scorsese imploring viewers not to watch his Netflix hit The Irishman on their phones.

The platform is looking to attract people on the go, whether they're on their commute or waiting in line at a bank. All of the programming will run at somewhere between 4-10 minutes in length – Quibi is short for 'Quick Bites' – with feature-length stories spread across multiple bite-sized episodes. It's also been confirmed that all the content will be downloadable, so you won't need an active internet connection to view.

But there's set to be more to the service than simply showing short TV episodes on a small screen – Quibi are promising to embrace the potential of the mobile device to create a new user experience, much as Netflix brought a new dimension to storytelling with interactive Black Mirror episode 'Bandersnatch'.

The innovative 'Turnstyle' feature (the ad above nicely encapsulates how it works) will allow you to instantly flip between watching a show in widescreen (like you do on your TV) and portrait (like a phone) orientations. A lot of the time, how you watch will be down to personal preference, but on some shows it'll change the way you see the story – thriller series Wireless will give you the chance to shift the POV depending on how you hold your phone, with the portrait mode allowing you to see how things unfold on the lead character's smartphone.

Meanwhile, Steven Spielberg's new horror series After Dark will take advantage of your device's clock to ensure the show's title is entirely literal, only allowing you to tune in at night. It'll be interesting to see what other standard phone functions Quibi can exploit on their future releases.

"What we're trying to do is bring together the best of Hollywood and the best of Silicon Valley to make viewing short-form content on your mobile extraordinary," says co-founder and chairman Jeffrey Katzenberg. "I think we are doing something that is now such a well-established consumer habit. You have 2.5 billion people walking around with these televisions in their pocket. They're already watching a billion hours of content every day. I just know it's going to work."

Quibi shows: exclusives and originals launching on the platform

Quibi is promising three hours of new content every day, coming from three distinct tracks. 'Quick Bites' will feature reality or alternative shows, while 'Daily Essentials' will give you a hit of news and sports coverage. The one that's likely to gain the most attention, however, is 'Lighthouses', the home of the platform's premium videos – that's the place where you'll get the stuff from big-name directors like Spielberg, Guillermo del Toro (The Shape of Water), Antoine Fuqua (Training Day), Doug Liman (The Bourne Identity), Catherine Hardwicke (Twilight) and Paul Feig (Bridesmaids).

Potential Lighthouses highlights include Spielberg's aforementioned After Dark, a reboot of The Fugitive with Kiefer Sutherland and Logan's Boyd Holbrook, an as-yet untitled twist on zombies from del Toro, and Fuqua's #Freerayshawn, which Katzenberg has described as a modern-day take on Dog Day Afternoon.

Elsewhere, Liman will take on superhero drama Crazy Talented, where the residents of a psychiatric ward deal with superpowers;  Hardwicke directs Emily Mortimer and Don Cheadle in future-set sci-fi tale Don't Look Deeper, about a high school kid who realizes she may not be human; and Frat Boy Genius will give the Social Network treatment to Snapchat founder Evan Spiegel. There's also a remake of 1999 American football movie Varsity Blues in the works.

Reality offerings include Idris Elba getting behind the wheel for real in Elba vs Block, Jennifer Lopez paying it forward in Thanks a Million, and Zac Efron venturing into remote jungles to play at explorers. Fight Like a Girl comes from WWE, and is about young women getting advice from WWE superstars. Reese Witherspoon is hosting a wildlife documentary series called Fierce Queens, too.

Meanwhile, The Hot Drop promises to make the old TV staple that is the dating show interactive; the home makeover gets an unlikely twist as a team of experts go into houses where murders and scandals have taken place (the phrase “from morbid to marvelous” has been used; and Unbreakable Kimmy Schmidt star Tituss Burgess hosts Dismantled, a cookery show that begins with mystery dishes being fired into the faces of two chefs with a cannon. We're not making this up.

In other words, you can't accuse Quibi of playing it safe…

If it isn't, it won't be down to a lack of ambition. Quibi's founders – former Disney chairman and DreamWorks co-founder Jeffrey Katzenberg, and former eBay and Hewlett Packard CEO Meg Whitman – are big names in Hollywood and tech, respectively, and they're setting their sights incredibly high.

Despite Quibi's content being made for the smallest of screens – the production values will be seriously high-end. Figures of $100,000 per minute of screen time are being quoted for the more premium shows, which puts them firmly in the Game of Thrones bracket – albeit significantly shorter in length.

Katzenberg and Whitman will also have the power to attract huge levels of financial backing – they've already brought in $1.4 billion of investment, with all the major Hollywood studios contributing – and shouldn't have any trouble enticing advertisers. Indeed, Quibi say that Google, Procter & Gamble and Walmart are already on board, and its entire first year of ad inventory in the US has already been sold out.

There's no denying that Quibi has rounded up some serious talent in building this brand new video platform, but that subscription fee feels like its biggest obstacle in an increasingly busy streaming market. It's a forward-thinking idea, to create TV around the changing ways we watch video, but ultimately that $4.99 per month might still be a big ask when you can already watch free video content from Facebook, YouTube or Instagram on the go.