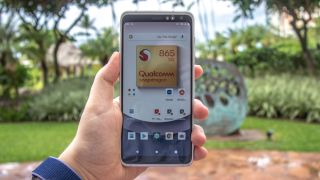 The forthcoming Samsung Galaxy S11 is going to be more powerful than the Apple's iPhone 11 Pro, at least according to our benchmarks of the Snapdragon 865 chipset.

Qualcomm, the chipmaker behind the Snapdragon 865, gave TechRadar the chance to test out an 865-loaded reference device, and with that, we ran all of the usual benchmarking applications: Geekbench, GFxBench and AnTutu to name a few.

What's important are these two things:

Without further ado, let's check out Qualcomm's Snapdragon 865 reference device, its specs and the benchmarks that come from it.

Technically, this is the first Snapdragon 865-powered smartphone, although you'll never be able to buy it. It's just a reference device that Qualcomm uses to demo the capabilities of its brand-new chipset.

Before we set out to benchmark the Snapdragon 865 and gain insight into what the Samsung Galaxy S11 could be capable of, Qualcomm reps did note that there's a "performance mode," which speeds up the chipset while draining the battery a bit faster. That did make a difference in some of our tests, as you'll notice.

When we test smartphones at TechRadar, we often rely on benchmark apps like Geekbench 5, and it has some good news for the Galaxy S11 thanks to the Qualcomm Snapdragon 865: its multi-core score assessment shows that Android phones will be able to outpace Apple's A13 Bionic chipset when it comes to complex workloads.

The single-core score, however, told a different story with a 931 Geekbench 5 score on Qualcomm's reference device. The iPhone 11 Pro Max got a rather appropriate 1331 when we re-ran tests today using the latest version of iOS 13.

The single-core compute score is better for simple tasks, like mobile web browsing, which can't be broken up to take advantage of eight cores at once. Single cores are becoming less important, and Qualcomm is putting emphasis on the multi-core score, GPU and AI chips within its multi-fanged Snapdragon 865 chipset.

For these tests, we turned to tools like GFxBench and AnTuTU for GPU benchmarks and AITutu and Ludashi AI Mark for newer AI tests. All four met or exceeded the scores that Qualcomm had in its 'expected' score range. The pre-installed GFxBench Manhattan offscreen test gave us a score of 89, AnTuTU's GPU test ran topped 221,435, Ludashi AI Mark went above 100K at 105,072 and AITuTu went to 455,235 after three consecutive tests on each app.

Translation? We're expecting powerful graphics and AI performance from Android phones in 2020, and the heavy tasks run by multi-core processors will catch up to and slightly exceed what Apple is capable of doing on its iPhones right now. Qualcomm's chipsets still lag behind when it comes to simpler tasks, but as app developers spread workloads to more cores, the single-core score is becoming less important than the combined effort of an eight-core mobile chipset.

Qualcomm's Snapdragon 865 chipset is only one hint at what we can expect from the Samsung Galaxy S11. In between the time in which we ran these benchmarks and now, there have been several significant Galaxy S11 leaks.

The most promising rumor is a potential launch date and city: February 18, 2020 in San Francisco, according to one credible leaker who specializes in Samsung Galaxy phone leaks. Last year, the phone was announced on February 20 in the same city, so we may be in for another long trip California before MWC 2020.

Officially, the Snapdragon 855 specs indicate the chipset tops out at supporting a 200MP camera, but Samsung is hedging its bet on 108MP, according to a new rumor that also pins the Galaxy S11 Plus with a 5,000mAh battery capacity. The Plus-sized version is also supposed to include a periscope zoom, taking a cue from the Huawei P30 Pro's incredible zoom range.

So why would the Samsung Galaxy S11 support a 108MP instead of going all of the way to the 200MP ceiling supported by the Snapdragon 865 chipset? It comes down to the size of the smartphone (it'd have to be a lot thicker) and the desire to keep individual pixel sizes above 1 micron (phone makers would have to go down to something much smaller [and inferior] like 0.7 micros to fit it in a modern phone, according to Judd Heape, Qualcomm's Senior Directorof Product Management, Camera, Computer Vision and Video).

Speed and processing power aren't everything. But there were so many close calls on our best phones list in 2019 that any edge could shake up our rankings in 2020.

The iPhone 11 was in many ways more capable than the many, many Galaxy phones in 2019, but the value of Samsung's devices were a win when it came to storage and price – that's what swayed us in the end. Little factors can make a big difference.

We're seeing a powerful yet efficient 5G-capable chipset from Qualcomm, so even if you're a fan of iPhone series, it's going to push Apple, Huawei and other non-Snapdragon-using smartphone manufacturers to compete. And that's a win-win for consumers no matter how they shop for phones.