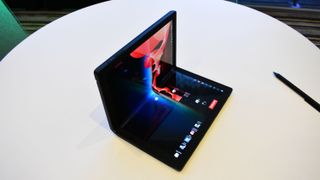 The humble laptop has been around for 40 years, but in that time not much has changed. The basic form factor of a clamshell device that opens up to show a display on the top half, and a keyboard on the bottom, can be seen as far back as 1981 with the Osborne 1, which many people consider to be the first laptop.

While the fact that the essential form factor of the laptop hasn’t changed in over four decades is a testament to just how good the initial design of the laptop is, don’t you think it’s time for a change?

Laptop makers obviously do, as it looks like 2020 will see an influx of new foldable laptops that are made of a single screen, or two screens joined together by a hinge.

Now, you’re probably correctly thinking that all laptops are foldable anyway – but this new generation of laptops will be doing something genuinely different, and something we’ve only seen so far in smartphones – as they’ll be made up of a single foldable screen.

We’ve already seen a few of those at CES 2020, which was held in Las Vegas at the beginning of January. The Lenovo ThinkPad X1 Fold was there, giving us perhaps our best look at what the future of laptops could be.

The Lenovo ThinkPad X1 Fold is made of a single 13.3-inch OLED display which can be used as a tablet, or folded into a traditional laptop, with half the screen acting as a keyboard.

Meanwhile, the Dell Concept Duet is an early prototype that was also shown off at CES 2020, but which takes a slightly different tack, being made up of two seperate screens joined by a hinge – similar to Microsoft’s upcoming Surface Neo.

With big names like Lenovo, Dell and Microsoft working on foldable laptops, it’s clear that this new form factor could be making a big splash.

However, these companies need to be careful. While the original laptop design nailed it, if companies rush out a product with a new form factor that’s riddled with problems, it could kill the foldable laptop concept before it’s really even begun.

Laptop makers were surely watching Samsung’s travails with its Galaxy Fold smartphone, an innovative foldable device that many feel was launched too early, and suffered from well publicized problems that lead to Samsung postponing the launch, and combined with the huge price tag, is likely to have led to its disappointing sales.

No one will want to go through what Samsung did, and this caution is probably why even though Microsoft announced the Surface Neo in October 2019, we won’t see it until the end of 2020.

As Anisha Bhatia, senior device analyst at GlobalData, a leading data and analytics company, points out, “Folding displays are still in the experimentation stage. Both manufacturers and carriers alike are figuring out specific use cases for foldable displays that best fit their overall strategy – whether they aim to market a media device or a productivity tool or a two-in-one product.”

Do we really need foldable laptops?

But do we really need foldable laptops made up of one or two screens? As I mentioned earlier, the reason why laptops have hardly changed over the years is because they work so well.

Anyone who has used a touchscreen keyboard, which these new devices will use, will know that they just can’t compare to physical keyboards – especially when typing for long periods of time.

There’s also the fact that the Galaxy Fold’s infamous issues will have put off potential customers. And like foldable smartphones, foldable laptops will likely cost a lot more than traditional laptops. Manufacturers will need to work hard to prove to consumers that these new laptops are worth the extra expense, rather than simply being pricey gimmicks.

But there’s obviously potential with these new form factors, and with the likes of Dell and Microsoft investing in foldable laptops, it’s clear that laptop makers think there’s enough people who are bored of traditional designs and want something new, something exciting, no matter what the cost.

“Most of the folding screens, whether in a phone, laptop, or smart speaker, are still niche concept devices, not to mention expensive,” continues Bhatia. “They represent an evolving trend, especially in a maturing and stagnating wireless industry which hasn’t seen true hardware innovation since Apple’s first iPhone in 2007.”

‘Stagnating’ might be a harsh way of putting it, but it’s pretty accurate. Customers may be getting bored of the same old devices that only add incremental updates, rather than revolutionary changes, and manufacturers are keen to come up with a bold new design that will change the game and get customers excited again.

Can foldable laptops do that? Maybe. But whatever happens, 2020 could be one of the most exciting years for laptops in a long time.