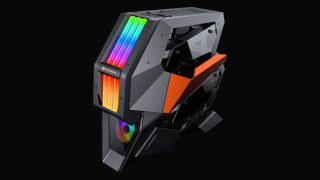 If you think that innovation in gaming desktop chassis design has peaked, think again: Cougar is back with its Conquer chassis line.

TechPowerUp reports that the company, known for designing attractive yet fairly budget-friendly peripherals, has launched Conquer 2 – and this time it’s taken Conquer’s robotic head-turned-computer casing look to a whole new level of cool/weird.

First unveiled back at Computex 2019, Conquer 2 appears to take cues from Cougar’s gaming mice, recreating their angular Transformer-esque look in a modular chassis that’s designed to show off the theoretically-badass internals inside.

And if you’re into that aesthetic and currently building your own gaming PC, then you might just be willing to shell out a pretty penny for this.

A lot of thought and attention to detail has clearly gone into designing Conquer 2. This chassis boasts metal framing that can be disassembled, modified and customized so you can build your own look.

It also boasts four tempered glass panels, so you can showcase those powerful internals you’ve painstakingly chosen, and their RGB lighting.

Of course, not to be outdone by what’s on the inside, Conquer 2 has its own powerful lighting system as well. The Trelux dynamic RGB lighting illuminates its facade, and can be “connected to a COUGAR Core Box or to a compatible motherboard’s 5V connection” for an even more immersive and synchronized lighting experience.

Inside is a detachable sub-chassis, which slides easily out of the back of the main chassis, and which has a more traditional shape to enable you to build your PC with ease.

This sub-chassis has a motherboard tray that can fit a CEB, ATX or smaller motherboard, and nine other expansion slots in its upper compartment. Its bottom compartment, meanwhile, houses a PSU bay with up to 22cm of space and two 3.5-inch drives.

To help cool all those powerful components inside, Conquer 2 touts an open-frame design, but it also champions liquid cooling, with a space for a 240mm radiator up front, and a 360mm one at the top – so if you haven’t considered liquid cooling before, you will now if you want to take this chassis home.

Cougar has yet to reveal when Conquer 2 will become available, or pricing – but considering that its predecessor currently costs $279 (£278, about AU$408), this follow-up likely won’t come cheap.