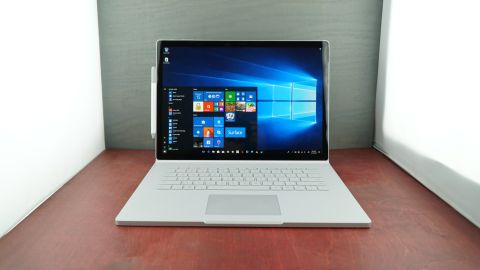 Recommended
Surface Book 2 can handle the latest PC games and last for a long time.

As it turns out, one of the best 2-in-1 laptops to date is just a larger Surface Book – one that can handle the latest PC games and last for a helluva long time, to boot. Not to mention that this is the best tablet for drawing that we’ve tested yet. We just wish Microsoft did a bit more with the extra space afforded by the new 15-inch form factor.

Back in 2015, when the Surface Book 2’s predecessor was launched, no one could have foreseen that the follow-up would go on to make the MacBook Pro look like a cheap toy in comparison. But, that’s exactly what happened. And, while the Surface Book 2 is pricier than its predecessor, it kind of has to be. Rather than only being a laptop that can flip around, it really is two devices in one.

The Surface Book 2 does inherit the original’s design, switching things up just enough to make the critics happy. The Dynamic Fulcrum Hinge, for example, is more solid on the Surface Book 2. The compact 13.5-inch design also makes its return alongside the 15-inch Surface Book 2 we reviewed here.

Both sizes of the Surface Book 2 have the potential to be your primary device, but is the new 15-inch model worth the startling price? Well, yes, but the price may send up and coming creatives running for cover.

On the other hand, the 13.5-inch Surface Book 2 starts at the fairly more modest price of $1,149 (£1,149, AU$1,599) in the US, with other countries likely to follow this pricing model. Sadly, you will have to sacrifice storage space to get this low price – you’ll be limited to 128GB of storage accompanying the dual-core i5 CPU and 8GB of RAM.

The Surface Book 2 is undoubtedly a pricey device, especially considering that the price doesn’t even include the $99 (£99, AU$139) Surface Pen. And, yes, we’re going to keep calling Microsoft out on this decision until it starts bundling this practically required accessory in with its Surface devices once again.

The Surface Book 2 is just $100 more than the 15-inch MacBook Pro, but you’re also getting a more powerful processor and a beefier GPU. And, that’s behind a crisper display with touch control so it can function as a tablet. Not accounting for taste, it’s hard to argue with the fact that the Surface Book 2 is the better value here. Plus, a year later, you should be able to find some deals that up the value proposition of the Surface Book 2.

We’re not complaining, however – Microsoft learned some valuable lessons from the Surface Book, evolving it into the thin, light and power-packed Surface Book 2. What’s more, when detached from the base, the Surface Book 2 is the lightest 15-inch tablet we’ve ever gotten our hands on – it feels smaller than it actually is.

That said, the Surface Book 2’s fulcrum hinge does make for a laptop that’s a bit more unwieldy to cram into a backpack than most, and it’s now more exaggerated than ever. Worse still, Microsoft didn’t make the most design-wise with the extra space that 15 inches affords you.

For instance, the glass trackpad isn’t quite as wide or deep as, say, the 15-inch MacBook Pro when it really could have been, given the amount of space under the keyboard. The lack of up-firing stereo speakers in the base is also a major disappointment, as there’s plenty of room on all three remaining sides of the keyboard for additional audio chambers.

Instead, we’re stuck with rather tinny, front-firing speakers on the tablet portion of the device. The bigger keyboard base should offer us bigger everything, frankly, not just bigger graphics. Worse yet is the positioning of the audio jack in the same odd, upper-right-edge location it’s always been, dangling over our hands and getting in the way of us typing.

In spite of that, the typing experience with the Surface Book 2 is phenomenal, with a brightly backlit keyboard that has punchy feedback and satisfying travel. We would like to see a bit more force in the keyboard’s feedback, but that could just be down to personal taste.

All things considered, we like the Surface Book 2 (15-inch) design quite a bit – even its 1080p webcam and rear camera should get approving looks at the next meeting or in your Instagram feed. However, we still can’t forgive the missed opportunities to refine the product that much further and make the experience that much bigger when it comes to how it feels, looks and sounds.

Of course, we’re just as in love with the Surface Book 2 (15-inch) display as we were with the earlier models. Text looks sharp on the screen as do photos and videos, even if the 3:2 aspect ratio makes for some inelegant thick black bars when viewing the latter.

The display’s resolution only falls short next to 4K laptops, and Apple’s MacBook displays can’t hold a candle to it pixel for pixel. While Apple’s P3 color gamut might tower over Microsoft’s panel in the eyes of art and media pros, we don’t see much difference between the two in terms of color reproduction.

We’re told that Microsoft dedicated considerable effort to improving the touch response in its latest PixelSense display for the Surface Book 2, and this shows in testing. If any latency between drawing on the display with the Surface Pen and its appearance on the screen was there before, it’s definitely indiscernible now.

In fact, if you scribble on a sticky note and run the Surface Pen off of the note window – you’ll see traces of ink appear on whatever is there, although it will almost instantaneously disappear. That’s a special processor rendering the ink before even Windows 10 does, we’re told, which should speak to the absence of lag in the touchscreen.

Additionally, attaching and detaching the screen from the keyboard base is as quick and effortless as you’d expect from a wildly expensive computing device. Whether it’s going into tablet mode or back into a laptop, it’s less than a second before you’re already tapping or typing away.

In any case, the Surface Book 2 screen just proves that Microsoft can craft displays that can hold its own against the world’s greatest in basically every metric.