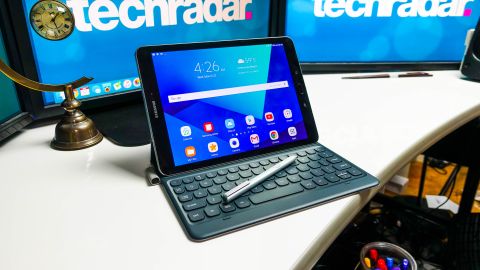 The Samsung Galaxy Tab S3 is headlined by an HDR-ready screen, four powerful speakers and an upgraded S Pen that’s included in the box, although you’re going to have to pay for the keyboard. Just don’t expect Android meet all of your 2-in-1 tablet needs next to a similarly priced laptop.

Update: The Samsung Galaxy Tab S3 has more competition than ever with the likes of the iPad Pro 11 and Samsung's own Tab S4 now on the market, but it's also now cheaper than it once was and remains a top Android slate.

It can do just about anything the iPad Pro 11 can, yet it costs far less. In fact, watching the dystopian alternate-history Amazon TV series The Man in the High Castle on the Samsung Galaxy Tab S3’s HDR screen prompts an analogy: what if Apple’s iPad Pro ran Android?

That’s pretty much what we have here. It’s Android’s first worthy competitor to the iPad Pro 9.7 (and the rest of the Pro range, though that one especially as it has the same screen size), with strong specs to match, and it pairs well with the elegant-looking Samsung Galaxy S9 and Galaxy Note 9 – also feature-packed and enveloped in glass.

The Galaxy Tab S3 is easily the best Android tablet you can buy right now thanks to its all-glass design upgrade, future-proofed HDR-ready display and included S Pen.

It's hardly a difficult call for us to make – other than the flawed Tab S4, the older Google Pixel C and the not-quite-as-premium Asus ZenPad 3S 10 are its only real challengers at a similar size.

What is a challenge is determining who the Tab S3 is right for. It launched at $599 (£599, AU$780), and while it comes with the S Pen (Apple’s tablet does not offer a stylus in the box), the keyboard is separate. When you add it all up, it borders on cheap laptop prices, and there’s no cheaper 8-inch Tab S3 to give you an affordable entry-level option.

You are also getting the first (though no longer only) HDR-ready tablet with better brightness and contrast ratio with the Samsung Galaxy S3 Tab.

The Galaxy Tab S3 is Samsung’s best travel-friendly 2-in-1 tablet that can pull off productivity – if you’re willing to pay for the separate keyboard. It’s thinner and lighter than the equally tempting 2-in-1 Samsung Chromebook Pro laptop, which doesn’t have a detachable keyboard and includes a smaller S Pen, and it finally gives the iPad Pro some meaningful competition.

The real value over Apple’s tablet comes from the S Pen, which is included with the Tab S3 – the Apple Pencil costs an extra $99 (£99, AU$145). You also don’t need to worry about recharging Samsung’s S Pen.

The Galaxy Tab S3 keyboard is a separate purchase, with Samsung charging $129 (£119), though as with the slate itself this can now be found for less if you shop around.

As for the Samsung Galaxy Tab S3 release date, it became available in US stores on March 24 2017, while the UK wasn't too far behind with a March 31, 2017 launch date.

The Samsung Galaxy Tab S3 touts a small but likable design upgrade over the Galaxy Tab S2, even if it’s easy to mistake it for Samsung’s year-and-a-half-old tablet from the front.

The best changes happen round back, where the Tab S3 sports a new glass back panel in either black or silver. It looks and feels better than the rubberized plastic cover of the Tab S2, and the glass is more comfortable to hold; while you’re trading instantly collected sweat marks on the older model for fingerprints and smudges on the Gorilla Glass back, you’re ending up ahead.

Samsung can technically still claim that the Tab S3 is thinner and lighter than an iPad Pro, with dimensions of 237.3 x 169 x 6mm and a weight of 429g (the iPad Pro is 6.1mm thick and weighs 437g). But don’t be fooled; the variations are hardly noticeable. The Tab S2 is 5.6mm and 389g, and we felt barely any difference between the three slates.

The Tab S3 looks and feels like a blown-up Samsung Galaxy S7 phone, with a useful physical fingerprint sensor home button, and 'back' and 'recent' capacitive buttons aligned at the bottom. Without the keyboard attachment, it excels at being an entertainment device first and foremost.

The real difference is seen and heard in the HDR display, which pumps up the contrast ratio, and the four speakers, which pump out the volume better than a tablet with a mono speaker.

We previously got a taste of HDR on a mobile device with the short-lived Samsung Galaxy Note 7 and it came back to Samsung phones with the Galaxy S8 and Galaxy S8 Plus, as well as subsequent S and Note handsets.

Samsung tablets and phones already have the best screens going, with bright and pixel-dense Super AMOLED display panels. Now, by including HDR technology, Samsung is making them even better.

High Dynamic Range (HDR) gives the same 2048 x 1536 Quad HD resolution higher contrast ratios and brighter highlights. This is especially important in darker movie scenes in which you tend to lose too much of the picture to shadow.

The Tab S3’s support of the new HDR10 standard is actually a bigger deal than if Samsung packed a 4K screen into a 9.7-inch tablet. The expanded brightness range does more than extra pixels would at this small size – more pixels matter when you’re dealing with a larger 4K television.

Here’s the problem: there’s not a lot of HDR video content available today. It’s being rolled out with streaming video services like Amazon Video and Netflix already on board on Samsung, LG and Sony TVs, but we weren’t able to find HDR video on these services at the tablet's launch.

Instead, we had to rely on Samsung HDR demos and movie trailers to enjoy what’s ultimately the future of video. It’s definitely a jump up in quality, but as the content isn't here yet, you’re paying in advance for a tablet that will deliver that improved quality soon, but not right now. That makes the Tab S3 an amazing technical feat, but a hard sell to average consumers at launch.

What you can take advantage of right now are the quad speakers on the Tab S3. They reach a more powerful volume than what we've heard from the mono Tab S2 and so many other tablets. Better yet, they’re calibrated to your movements, so as you rotate the tablet the stereo speaker orientation changes, so you’re never holding it the wrong way for sound.

As long as you’re not expecting deep base, these AKG-tuned quad HD speakers go ear-to-ear with the those on the equally-rich-sounding iPad Pro 9.7. You can get some bass out of the Tab S3 with the right headphones, which you’re probably going to use more often when roaming with this tablet in public.

And good news: this tablet has both a 3.5mm headphone jack on the bottom of the frame, and supports Bluetooth 4.2. No one is getting rid of headphone jacks in tablets – yet.

The Samsung Galaxy Tab S3 transforms in look and potential with the included S Pen and keyboard attachment. They’re the must-have accessories to unlock the full potential of this 2-in-1 tablet.

The S Pen is an upgrade from the thin stylus we’ve been using on Note phones and the Samsung Chromebook Pro. At 9.4mm thick it’s bigger and easier to hold, and makes the previous S Pen look like a toothpick by comparison. It still has a fine 0.7mm tip (this time made of rubber instead of plastic), and a clickable side button for bringing up the familiar Air Command tools.

All the usual S Pen tools are here, including Notes, Smart Select (create cropped or lassoed screenshots and GIFs), and Screen Write (write directly on a screenshot). There are also three newer functions that can be added to the fanned-out shortcut list: Translate, Magnify (zoom in) and Glance (dock and quickly view an app).

Handwriting and drawing are naturally better on a tablet using a thicker S Pen, too. It’s around the same width as the Apple Pencil, but shorter and boasts four times as many pressure levels. It really captures every angle, which can be great for shading, depending on the app you’re using. Samsung includes two apps – Notes and the coloring-book-like PEN.UP – and there are more in the Google Play Store.

The S Pen doesn’t slot inside the thin tablet, so you can’t seamlessly hide the thicker stylus when it’s not in use. Instead, Samsung has added an pen holder loop for the keyboard – if you buy the keyboard. The good news is that the S Pen doesn’t need to be charged, and doesn’t roll away constantly, as it has two flatter sides and a clip. The Apple Pencil likes to roll off tables because there’s nowhere to put it and, if frequently used, is always at risk of being out of juice.

The Samsung Galaxy Tab S3's keyboard attachment is worth the extra money if you’re looking to substitute this tablet for a laptop. Its cramped layout (a necessity) is still useable, with decent travel when you hit the plastic keys – and all the important keys are here.

What’s missing? There are no function keys along the top (we’re okay with that), and it’s sorely missing a home button, requiring you to reach for the fingerprint home sensor on the tablet and possibly knocking your coffee over in the process. We’d also like to see the search key bring up Google Search instead of Google Now On Tap, requiring an extra screen press for the search bar.

Everything folds up nicely, enveloping the tablet in a soft plastic cover on both sides. That’s a big plus. Apple’s iPad Pro keyboard cover only protects the front screen – and aluminum does dent, much like glass shatters. Samsung basically throws in a back cover for free.

Best of all, there’s no need for Bluetooth pairing or charging. The keyboard has six Pogo pins above the top row of keys, and these magnetically clip to the Tab S3’s side frame. Samsung has its own version of the Smart Connector.

We just wish its magnets were stronger. Picking the tablet up by the screen often detaches the bottom part of the keyboard (luckily the back, where there are more magnets, stays secured). The end of the screen cover should also be magnetic, and should turn off the screen when closed. It doesn’t – instead, it can flap open if you’re not careful.

Next Page Software and performance