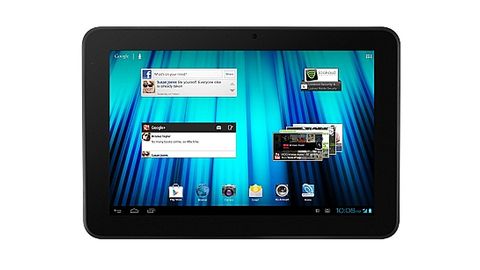 Super fast and super cheap, but does it perform?

Apple's massive success with the original iPad back in 2010 had rival companies scrambling to create their own touchscreen devices.

Some of these rushed products were mediocre. Others were offensively bad. And Telstra's T-Touch Tab fell firmly into the latter category.

With its resistive touch screen, underpowered processor and the mobile version of Android, there was very little outside the price to like about Telstra's first tablet device. Even the name was awkward.

Fortunately, it seems like the mobile network learnt a lot of lessons from its previous attempt, and done its best to bring a decent compromise between specs and price to market in the form of the 4G tablet.

With a large, 10.1-inch 16:9 widescreen display, the 4G tablet feels solid and well made. A textured back, and grips on either side make the tablet easy to hold, at least in the horizontal perspective.

The front of the Telstra tablet is dominated by the screen, with a two megapixel camera situated above the display. The camera is slightly off centre, which annoyingly draws your eye once you notice it's not in the middle of the screen.

Standard power and volume buttons adorn the top sides, while a proprietary dock connector sits on the bottom of the tablet.

This port - which looks like the familiar 30-pin Apple dock connector - unfortunately means there's no simple USB charging method, so if you forget your charging cable you're all out of luck.

A MicroSD card slot and SIM card slot sit underneath flimsy plastic coverings. Chances are you'll never open either slot once you pop the relevant card in the right place, so we do wonder why a more elegant solution wasn't conceived.

The back of the device is noticeably stark, with the five-megapixel snapper kept company by a few logos and basic product information.

Weighing in at 670 grams, the 4G tablet is far from the lightest on the market, but given Telstra needed to shove a big 6900mAh battery inside to help counter the 4G juice sucking, it's actually quite reasonable.

Overall, there's nothing overly remarkable about the 4G tablet's design. It is kind of reminiscent of the original Motorola Xoom, which isn't a bad thing necessarily, but don't expect this to win any international design awards.

Next Page Display and Interface