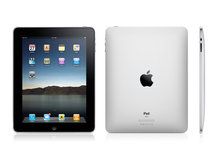 Another fantastic device from Apple, but we're not so happy about the price premium you pay for the 3G version.

After many delays, the Apple iPad is now available in the UK in both 3G and W-Fi-only flavours. The model we're testing today is actually called the iPad Wi-Fi + 3G in full parlance, but iPad 3G will do for us. (Read our review of the iPad Wi-Fi version.)

If you're hoping to get your hands on one you'd better be quick though - Apple Stores had limited stock on launch, while website orders now cite just 'June' as a shipping date.

Then, of course, you need to budget for an iPad data tariff – check out the fourth page of our review for more details on all the costs.

If you're more interested in the iPad Wi-Fi, then check out our main Apple iPad review.

The iPad 3G is a little different in terms of appearance – it has a black plastic strip at the top of the back of the iPad, which makes sure the iPad gets decent 3G reception. An all-metal case wouldn't be any good for this.

There's also the microSIM slot, so you also get a SIM eject tool as well as the Dock Connector to USB cable. Sadly, there's no dock in the box, but you do get a power adapter.

The other big boon of the iPad 3G is that you get GPS capabilities, so you'll get a better experience in, say, Google Maps and geo-tagged tweets, for example. Both models do have a digital compass, though. However, testing in our other iPad review for the Wi-Fi-only model indicated that the iPad Wi-Fi was still fairly good at picking up the current location via Wi-Fi.

The iPad uses iPhone OS which, at the time of writing, is yet to support multi-tasking. However, iPhone Os 4.0 is imminent, which will mean that multi-tasking apps will be supported.

The use of the iPhone and iPod touch OS means that the iPad is a great living room-type device. It's great for just popping online or emailing sporadically. We've seen tablet-type computers before, of course – most notably courtesy of Microsoft – but they haven't stepped up to the plate. Instead, they've had dodgy handwriting recognition and poor controls.

As usual with Apple, they've taken something established and done it better – and that's even before you get to the apps which take the iPhone and iPod touch model to a completely new level.

Even Windows 7, with its touch compatibility, isn't quite up to the job of providing a completely intuitive touch-based interface.

So no wonder Apple has had so much success with iPad. But remember this is just the beginning – we'll soon see tablets based on Android (like the Dell Streak) and, later in the year, Google's Chrome OS. So let's look at iPad 3G in depth.