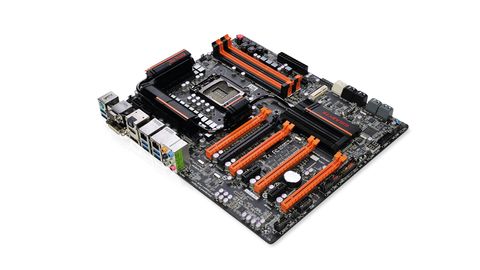 Gigabyte has made a startling return to form with its Z77 series. Back in the Z68/Sandy Bridge era it was losing ground daily to the Asus front-runners, and small upstarts such as ASRock were really eating into its mobo numbers.

But a tighter rein on product numbers and more focus on the different options on offer has made this generation of Gigabyte boards every inch as competitive on the desktop as the other big guys.

In the last PC group test, Gigabyte and Asus split the machines between them, with the bargainous Gigabyte Z77X-D3H and Asus P8Z77-LX making up the majority of builds. So Gigabyte has you covered at the lower-end and, with the Z77X-UP5TH - a super-specced board with a pair of Thunderbolt connections - it's got the high-end catered for too.

This Z77X-UP7 is more along the lines of the Asus RoG range or ASRock's latest Z77 OC Formula - all the bells and whistles you could possibly want from a high-end board, but with everything an LN2-snorting pro-overclocker might be looking for.

The headline number for them is going to be the 32 power phases Gigabyte has managed to cram on top, which helps smooth out the power streaming towards the CPU. It's also, typically, stuffed with voltage checkpoints, manual overclocking buttons and more PCIe 3.0 slots than you can shake a GPU at.

I have to admit we were hoping for a bit more of an impressive showing in the overclocking stakes, and while I was able to get the test rig to boot into Windows at 5GHz it was anything but stable - I had to knock the clock back to 4.8GHz for that.

What's more, it didn't deliver the performance we've seen at those speeds in other boards - even other Gigabyte motherboards.

It did demonstrate the motherboards' strong gaming performance in this generation of Intel setups though - both the Total War: Shogun 2 and Batman: AC figures are right up there with the best of them.

Sadly, the overclocking performance leaves us a little underwhelmed with a board ostensibly designed for that one focus. With some LN2 and some serious digging and tweaking in Gigabyte's quality UEFI BIOS, I'm sure you can get more out of it but for the general user, without a steaming metal tank in the corner, it's not enough to justify the purchase.

What might be, however, is the sheer amount of extras you get. It's got three USB 3.0 controllers, giving you four ports from the Intel chipset, four from a VIA chip and a further two from an internal header attached to a bit of Etron silicon.

Gigabyte has done the same with the SATA interface, adding two Marvell SATA 6Gbps controllers to the existing chipset controller for a maximum of six SATA 6Gbps ports.

This board may not excite on the overclocking front, but at just over £200 it's absolutely packed in every other area that counts.