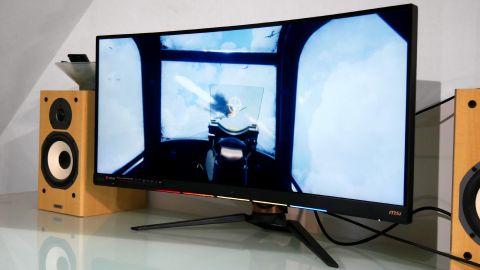 Is a glorious 34-inch curved LCD panel with support for 144Hz refresh, adaptive sync and HDR enough to stand out in the crowded gaming monitor market these days? The new MSI Optix MPG341CQR offers all that, plus some gamer-friendly extras and does it all at a price that looks pretty punchy compared to several key competitors.

For starters, MSI has gone for VA rather than the near-obligatory IPS screen tech that prevails in most premium LCD panels. MSI has also fitted the Optix up with some particularly snazzy RGB LED lighting.

Plus, there’s both an integrated camera in the lower bezel, plus a mount for your own camera designed for gamers who like to livestream their gaming experiences.

But this panel will have to deliver on its core proposition as a 34-inch super-wide gaming monitor. While the extras sweeten the deal, the Optix MPG341CQR has a tough fight on its hands versus the usual suspects in this category from Asus and Acer. Game on.

Priced at $799 and £869 in the UK (around AU$1,200 –  official Aussie pricing has yet to emerge), the MSI Optix MPG341CQR’s UK price is currently a little anomalous. So, if you’re tempted, we’d recommend holding out for a month or so, we think the UK level is likely to drop a little.

But in general terms, MSI has priced this panel aggressively even if it’s still a lot of money to invest in a screen.

The likes of Asus’s ROG Swift PG349Q is several hundred more expensive but can’t quite match the MSI’s 144Hz refresh.

The Asus PG348Q offers similar pricing but only 100Hz refresh. LG’s 34GK950F can match the 144Hz, but again will cost you several hundred dollars or pounds more.

The MSI Optix MPG341CQR might look like great value compared to many alternatives. But it’s still expensive in outright terms, so you’d expect a quality product. That’s precisely what you get.

The design is sophisticated and feels expensive. The stand is robust and widely adjustable for height, tilt and swivel. The aesthetics are pretty slick too, thanks in part to slim bezels on three sides of the panel. Looks-wise, the other standout feature involves the “Mystic Light” RGD LEDs along the lower bezel.

Strictly speaking, they add nothing to the performance of the MSI Optix MPG341CQR as a monitor. But if you like this kind of thing, it’s a clever implementation, fully programmable and configurable with neat looking transitions as the colors flow smoothly along the individual LED segments. It’s very slick.

More conventionally, the MPG341CQR’s core feature set begins with a 34-inch VA panel that boasts both an 1800R curve and 144Hz refresh. That’s pretty nippy for a VA panel, which raises questions about this monitor’s pixel response. It’s rated at 1ms, but pixel response hasn’t always been a VA strong point.

Most of the competition in this segment goes with IPS panel tech, but VA tech does have one very clear advantage, namely static contrast. This monitor is rated at 3:000:1 for static contrast, far better than any IPS screen can achieve.

Resolution-wise, we’re talking 3,440 by 1,440 pixels, which is the current norm for this class of 21:9 aspect monitor. There’s also adaptive sync support in FreeSync 2 rather than Nvidia G-Sync form.

The final really significant feature from an image quality perspective is HDR400 certification. It’s the very lowest level of HDR support and doesn’t include local dimming. It also means the MSI Optix MPG341CQR is capable of 400 nits brightness, which is punchy by conventional terms but nowhere near the 600 or 1,000 nits produced by what we would class as true HDR displays.

Elsewhere, you get excellent connectivity in the form of DisplayPort, HDMI and USB-C interfaces. MSI has also fitted the Optix MPG341CQR with a camera in its lower bezel.

When MSI showed this screen off at trade shows earlier this year, that camera was the basis of a number of so-called AI features including facial recognition for jumping between OSD menu presets.

Most of those features aren’t now mentioned on MSI’s website or in the screen’s manual, so it’s unclear whether they are due to be enabled, perhaps in a future firmware update. However, what you do get is a NightVision mode designed to improve contrast in darker game scenes.

Speaking of cameras. MSI also provides a mount that fixes to the top bezel. The idea is to attach a webcam to the display for streaming purposes. It’s a niche feature, but could be handy for gamers who like to stream.

A 34-inch superwide panel with 3,440 by 1,440 pixels and 144Hz refresh is arguably the sweet spot for high-end gaming right now. Yes, you can have higher resolutions and refresh rates, but the returns diminish pretty rapidly.

The main advantage of the MSI’s particular combo of specs is that it allows for quite a bit of detail and very fluid frame rates in nearly all games courtesy of graphics cards that actually exist today.

4K at 144Hz is all very well. But good luck driving a game like, say, Metro Exodus at 4K and full detail. You’ll need one heck of a graphics card to break 30fps, let alone 144fps.

Anyway, thanks to the use of VA technology, the MSI Optix MPG341CQR looks vivid and punchy straight out of the box. Colours are very vibrant, while black levels are outstanding. Granted the HDR400 certification is very much poor man’s HDR.

But this is still a bright and dynamic display by conventional standards. Think of it as turbocharged SDR rather than true HDR and you’ll get the right idea, even if it is handy that this display can process an HDR signal. It means you’ll get the correct colours when viewing HDR content, be that video or games.

MSI also scores points with the Optix MPG341CQR’s default calibration. There’s little to no sign of compression in either white or black scales, which is pretty impressive. The general image quality is good, therefore. What about gaming?

MSI offers three levels of pixel response. The fastest is a little OTT and results in some overshoot and inverse ghosting. But the middle setting makes for very good response with no noticeable downsides.

Yes, there are LCD panels that deliver slightly less motion blur. But what MSI has achieved with VA panel tech here is impressive. There’s also a zero latency mode, but we found little subjective evidence of lag operating in standard mode.

Of course, the 144Hz refresh makes everything feel so smooth and slick, provided you have sufficient graphics firepower. It’s also worth noting that the MPG341CQR’s adaptive sync works fine with both AMD and Nvidia graphics cards. Nvidia’s control panel recognises it as ‘G-Sync compatible’ and enables adaptive refresh automatically without any need to force that functionality on.

One final plus point is USB Type-C functionality. In our testing, all of the MPG341CQR’s key features run nicely over USB-C. That means you can hook up a gaming laptop over USB-C and have 144Hz and adaptive sync. For gamers that run laptops but want a desktop display for home, that makes the MPG341CQR very appealing.

What to make of MSI’s new Optix MPG341CQR? In a gaming monitor market that’s very crowded, it does an excellent job of standing out. The use of VA rather than IPS panel technology is a net plus in terms of image quality.

It makes for punchier colours and better contrast than the IPS alternative and in this implementation comes with little to no downside in terms of response and input lag. We’d rate that as a win.

MSI has come up with a very nice overall feature set. The core specifications, including the superwide 1440p resolution and 144Hz refresh are right at the sweet spot for high-end gaming right now, while the extras including the fancy RGB LED lighting and USB-C connectivity may sweeten the deal depending on your needs and preferences.

All that is delivered at a price that may not be strictly cheap, but it is highly competitive with similar monitors. The reality is that this class of gaming panel is expensive. But if you’re shopping in this part of the market, we recommend you put the MSI Optix MPG341CQR at or near the top of your shopping list.