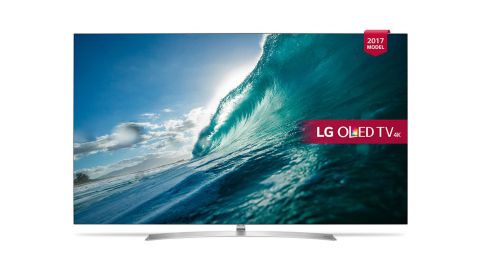 It's not the youngest OLED TV on the market, but LG have truly hit the sweet spot with the LG OLED55B7. This 55-inch set is impressively bright for an OLED panel, and rounds that off with a stylish design and immersive 2160p resolution for a truly affordable price tag. With support for all three key HDR formats catered for, plus Freeview Play, it’s an easy set to lust over.

The year-old LG OLED55B7 may be starting to look a bit long in the tooth, with the TV industry's release schedule being what it is, but you might not want to dismiss what's on offer here. LG's B7 is a mid-range 4K OLED TV with plenty to recommend it.

You want Dolby Vision on top of industry standard HDR10? Check. Fancy a slick design that's not just another black bordered flatscreen? You got it.

The B7 was LG’s 2017 entry-level OLED screen, positioned below the below the better (but more expensive) C7 OLED, G7 OLED, E7 OLED and W7 OLED models. You can find it in both 55- and 65-inch screen sizes - both of which should be available at bargain basement prices now that the newer B8 OLED is finally out on the market.

While LG has made some serious strides with its 2018 OLED televisions, including improvements to the Look Up Tables (LUTs), the 2017 models are still quite formidable TVs in 2018. They still offer a big upgrade for HDR performance, and less obviously come with a number of fantastic features, including 360 degree video playback, smart assistant integration and an OLED still image gallery.

If you're looking for the latest and greatest, check out the newer LG B8 OLED - but, if you don't mind last year's tech, the B7 is still a great value.

An ultra slim silver bezel and crescent stand, with LG OLED branding, set the B7 apart from its brethren. Build quality and finish is good. The silver finish extends to the back of the panel, where it contrasts with a white plastic casing. The look is sophisticated, although the silver frame can be distracting when light catches it.

The panel is wafer thin, but bulks to 48.6mm with electronics and sound system.

The screen has four HDMI inputs, all HDCP 2.2 compatible, so they can be used for 4K sources such as a UHD Blu-ray player, games console and set top box.

There are also three USB inputs, one of which is a fast v3.0 input, a digital optical audio output and Ethernet. Wi-Fi is standard. There's also a satellite tuner and Freeview Play terrestrial tuner.

The set comes with a single remote, the latest version of LG's cursor-based pointer, used to navigate the screen's webOS smart platform. It's responsive and intuitive to use.

Design TL;DR: With a minimal silver bezel and hairline back cover, the B7 isn’t just another black-clad frame. The panel sits on a chromed crescent pedestal stand.

LG has made a number of revisions to the 3.5 iteration of its webOS connected platform, but (thankfully) none too radical. The UI is as intuitive as ever, offering simple navigation and powerful customisation.

The Home screen is built around a striped Launch Bar for apps, inputs and features. Live TV and HDMI selection claim the early slots, followed by streaming apps and catch-up TV services. Keep on scrolling and the list changes to features, including that OLED gallery, Screen Share for casting from mobile devices, and multimedia playback (Photos, Music and Video). The order of this listing can be customised. If you Miracast a lot, simply grab the Screen Share tab with the remote and drag it to where you want it.

The remote control has dedicated buttons for both Netflix and Amazon. Rather neatly, these streaming apps remain open and live, even when you navigate away from them. This means you can pause House of Cards, check the news on Live TV, and then return to your paused episode.

Netflix streams 4K with HDR and Dolby Vision, as well as Dolby Atmos audio where available. There's also Amazon in 4K with HDR and YouTube in 4K. Other attractions include Now TV, BBC iPlayer, ITV Hub, Demand 5, All 4 and Wuaki.TV, plus other sundries.

Smart TV TL;DR: LG's webOS was the original minimalist smart UI, and it's still fresh and engaging here in this 3.5 iteration. Navigation is helped by LG's clever Magic pointer remote.

Colours are rich and vibrant. The set does a convincing job with skin tones and bright primaries. Noise is only notable by its absence.

Amongst the various image presets is an HDR Effect image mode, which can be applied in variable strengths; however we're not convinced it contributes anything positive and hence generally opted to leave it off.

HD/SDR Performance TL;DR: The B7 looks great with HD content, its SDR performance is bright and colour rich. It’ll reinvigorate your Blu-ray collection.

Naturally, the B7 comes into its own with 4K sources. Fine detail, beautiful textures and smooth colour make this screen a corker. That said, you'll need to choose your viewing modes carefully – and there's devil in the detail

Ostensibly image quality is great, although a look under the skin reveals a few issues. Out of the box, the set displays moiré patterning with high frequency 4K signals on all image presets. In order to remove this artefact go to Aspect Ratio and ensure Just Scan is turned to On. This is the only way to ensure that (some) high detail isn’t being obscured.

The panel has no problem tone mapping content mastered at 1000 cd/m2/nits, although there’s some low level black level clipping.  The set’s colour performance is fabulous too, with deep rich, wide hues. We experienced no issues with colour banding.

It’s early days yet for Dolby Vision, but it’s clear that the technology itself is no guarantee of superior image quality.

Okja (Netflix) is a good example of streamed Dolby Vision. This recent Cannes entry is a beautifully shot movie, and early scenes of the titular Super Pig meandering though the South Korean forest, dappled by bright sunlight, look superb.

Netflix’s UHD resolution is impressive: the texture on Okja's hide and the detail in the landscape is all highly impressive. But the white subtitles are just too bright – often the brightest component in the whole picture, their Dolby Vision glare does nothing at all for the overall balance.

When it comes to motion handling, the B7 does a reasonable job. For sports coverage, we’d recommend the Clear Trumotion setting, with general TV viewing on User (de-judder 0/de-blur on 10). For movies though it’s probably best switched off entirely.

This helps the B7 paint some splendid imagery. With Mad Max Fury Road (UHD Blu-ray), there’s searing heat in the bright sunlight. When Max rides into the sandstorm, lightning bolts crackle with fierce luminance, fiery exhausts lighting up the electric gloom.

Similarly, the catacomb sequence in John Wick Chapter 2 has plenty of  depth, while torches and uplighters zing through the gloom. Despite the low light, there's detail aplenty in the brickwork.

4K/HDR Performance TL;DR: LG has cranked up the peak brightness for this high performing HDR OLED, and colour vibrancy is high. We could watch this set till the cows come home.

Audio is more of a conundrum than you might imagine on the B7. The set incorporates standard low-fi downfiring stereo speakers. They’re somewhat monophonic, and you’d certainly be advised to upgrade them a more elaborate sonic solution, be it a bar or home theatre system sooner rather than later.

However the set also has a Dolby Atmos decoder, and (along with other 2017 OLEDs in the LG range), a Netflix client that receives both Dolby Vision and Dolby Atmos streams.

The aforementioned Netflix original movie Okja is the first Netflix content to offer Dolby Atmos with Dolby Vision. To make the most of this, you’ll need to route the Atmos audio out of the set using HDMI ARC to a Dolby Atmos soundbar or AV receiver.

Sound Quality TL;DR: The set’s ordinary low-fi TV speakers are nothing to shout about, but since LG released the firmware update to enable an Atmos signal to be passed through HDMI it's now easy enough to hook up an external Atmos-enabled sound system.

Other panels to ponder...

The LG B7 currently sits close to a number of similarly priced OLED screens. The 55-inch Panasonic EZ952 doesn’t go as bright and lacks Dolby Vision support, but actually gives a sharper 4K picture.  Philips 55POS901F has the benefit of Ambilight, but uses a 2016 panel which just isn’t as good as either rival.

LG’s own C7 is a possible alternative. The screens share the same panel and SoC. With only cosmetic differences to the stand, there could be good savings to be had if you luck out on a retail promotion.

If you want to step up a notch, Sony’s 65-inch A1 OLED is well worth saving for. This screen combines innovative Acoustic Surface technology with a stunning UHD HDR picture performance.

Overall, the 55-inch B7 is a terrific 4K TV. Offering vibrant, dynamic HDR images, it dazzles with the best of them, and has the ability to deliver profound black depth. It doesn’t need UHD to look good either - the set does a great job with regular HD.

Admittedly, it’s not the sharpest 4K performer out there, but any shortfall is compensated by an expansive specification. With Dolby Vision available, on top of HDR10 and HLG, buyers should feel reasonably covered when it comes to HDR. On top of that, the set’s connected functionality is top notch, WebOS remains an easy Smart platform to live with, and a full app drawer plus Freeview Play (for UK viewers) ensures extensive catch-up services. When you balance performance, price, design and features, the B7 can ultimately be considered a great buy.