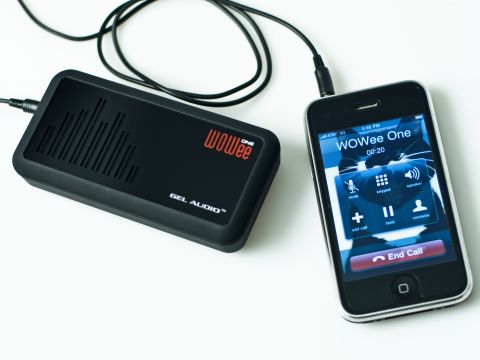 The Wowee One turns any flat surface into a makeshift subwoofer

In the eternal trade off between portability and sound quality, portable speakers are universally rubbish, but the Wowee One attempts to change that, by using some clever technology to turn any surface into a speaker for better bass response.

The trouble with tiny speakers is that they have little capacity for low bass frequencies, which makes your favourite tunes sound like an early version of Morse code played through a tin can.

The Wowee One is designed to vibrate, and enable those low frequencies to bass onto flat surfaces that it's placed on. In effect this makes the bass frequencies sound warmer than most portable speakers of its size- although that's not saying much.

The Wowee One has a built in battery, and charges via USB and boasts 20 hours of playtime. This which means all that's required is a 3.5mm jack cable, which is supplied, to the speaker into your MP3 player.

The Wowee has a grippy rubber pad on the bottom which enables you place on vertical surface such as windows and walls, and it stays put without leaving marks, as if held by invisible magnets.

There's an impressive volume level which is more than loud enough to entertain a group of friends, however, when reaching the upper limits, the bass aiding vibrations started to feel more like a ringing mobile phone on a desktop, which left us rushing to lower the sound.

Next Page Wowee One: Verdict