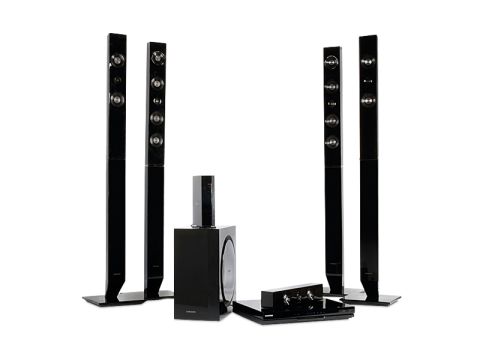 The skyscraping speakers look the business, but don't offer real 7.1

The HT-D6750W package comprises two slim tallboy (1.3m) stereo front speakers which bolt together in the middle, and a pair of similar tallboy rears. They're joined by a small horizontal centre and a large (but light) subwoofer, which uses a 6.5-inch woofer and 10-inch passive radiator.

Samsung bills this as a 7.1 channel system, but there are no extra enclosures. Instead the main stereo loudspeakers each sport a separately driven, swivelling frog eye, which aims at the ceiling (or thereabouts). That counts, apparently.

At the heart of the shebang is a digital amp with integrated 3D Blu-ray player, two-in, one-out HDMI functionality and Smart Hub connectivity. For those who don't have a wired network connection handy, Wi-Fi is built-in.

One extra nicety is that the rears are wireless. That's to say you don't need to run speaker cable from the main amp. Instead there's a module, the SWA-5000, which receives a wireless feed (dual band 2.4/5.8GHz) from a transmitter plugged into the back of the main unit.

The 3D Blu-ray component of this system is clearly a derivation of the brand's standalone models. Video quality is high and functions broad.

Samsung proudly declares the power output of its digital amplifier to be 1300W. Given that it only draws 70W at the mains, this is obvious bunkum. I suspect it's more likely to be around 25-30W per channel. This is plenty for a smaller room; during my audition I never felt the system lacked volume, only dynamics.

So what of the HT670's 7.1 billing? Well, this is not a 7.1 system in the traditional AV sense, but Samsung's engineers maintain the HT-D6750W takes advantage of DTS' speaker remapping function, which uses 'sophisticated algorithms to electronically reposition speakers in the living room' if they don't match the placement used during recording.

But, if you think you can take a panned rear sound effect, throw it from a front height driver and get the same listening experience, you're simply delusional. Playing Rush Hour 3, a DTS-HD Master Audio 7.1 mix, there was simply no correlation between what came out of the back of a conventional 7.1 system and this front-weighted simulacrum.

However, rear back/front height speakers aside, the system does a spirited job panning 5.1 multichannel audio to and fro. The audiovisual excitement of TRON: Legacy (3D Blu-ray) is not lost here.

Without a doubt, the star of this particular show is the 50Hz Super Tweeter, which delivers a crispness and clarity that lifts this entire system above the purely mundane.

There are caveats of course. Voice matching is a little rough, while timbre across the L/C/R is compromised because the centre speaker doesn't sound the same as the tallboys. It lacks that splendid tweeter, and consequently sounds comparatively dull.

While I contest the value of this system's bonus height drivers, I do think that overall Samsung's HT-D6750W is rather good fun.

The functionality it offers is exceptional, ticking every must-have feature box, and overall can be considered a good value option if you're not interested in a larger separates-based home cinema system. Just don't tell me it's 7.1.