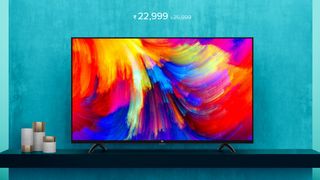 The Mi LED Smart TV 4A-series smart televisions are now available for anyone to buy on open sale through Flipkart and Mi.com.

The TV comes in two sizes-- 43-inch and 32-inch. The 43-inch variant of the Mi LED Smart TV 4A has a full HD panel with 60Hz refresh rate. Whereas the 32-inch variant is only HD, but refresh rate remains the same. Both the TVs offer 20W speaker output with DTS audio.

Both the devices run on Xiaomi’s own Patchwall UI. The 43-inch smart TV has 1GB RAM, 8GB storage, running on a quad-core Amlogic T962 64-bit processor. What makes it special is its blue light reducing feature aimed at cutting the amount of strain put on the users' eyes.

The 32-inch variant, on the other hand, runs on a quad-core Cortex-A53 processor with a Mali-450 MP3 GPU. Similar to it’s big brother, it has 1GB RAM but its storage is halved at 4GB.

The TVs are among the top options in their price segment, but owning one isn’t as easy as it sounds. Many who wanted to buy a unit had to wait for flash sales, which usually is a tiresome task. But looks like Xiaomi now has enough stocks.

Note that the flagship Mi TV 4 is still not available on open sale. It’s the high-end 4K LED TV with Dolby audio. It has a 10-bit 4K panel with 60Hz refresh rate and of course, it costs more than the 4A-series at Rs 44,999.