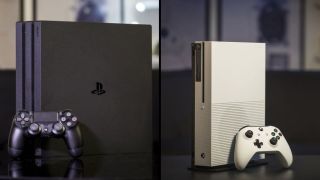 PS4 Pro or Xbox One S: a question that's gripped us since both consoles came to market in 2016.

Both mid-cycle upgrades on the original Sony PS4 and Xbox One consoles, they heralded a more pragmatic approach to console development – one where Microsoft and Sony offered players more powerful hardware, 4K Ultra HD picture quality, and improved features without having to jump ship to a whole new system.

Today, if you're in the market for a high-powered games console capable of the most advanced graphics, you're looking at either the PS4 Pro, which is a pretty powerful upgrade over the original PS4, or the Xbox One S, which adds an Ultra HD Blu-ray player and 4K upscaling to the original Xbox One.

The slightly newer Xbox One X is an even more advanced UHD powerhouse, though we've run through the key differences between the current Xbox consoles in a separate guide below. Or if you're not overly concerned with having the highest power and the latest graphics, we'd throw the Nintendo Switch into the mix for your consideration and direct you to our comparison hub for that.

For now, though, we're looking at the two upgraded consoles that first hit our shelves in 2016: the PS4 Pro and Xbox One S.

In some ways, this is no longer the battle of the moment – given the new consoles that have launched in the years since, and the others that are soon incoming. But if you want to buy a new console with 4K capabilities right now, and don't want to shell out for the Xbox One X, then these are the two best consoles to consider.

This guide is focused on these two pieces of hardware specifically, but if you’re looking for a comparison of the two platforms as a whole then you should check out our full guide to Xbox One vs PS4, which details everything from the console’s respective controllers, to their game libraries and online networks.

The headline graphical feature of both consoles is their 4K output, but how exactly each console achieves this is a little different.

With the Xbox One S its 4K output in games is generated by a process known as upscaling. The games themselves are rendered at a maximum resolution of 1080p (otherwise known as ‘Full HD’) and then stretched to have it fill the entirety of a 4K screen.

Since 4K is four times the resolution of Full HD this means that with the One S each one of the game's pixels is being stretched across four of your television's pixels, and the result is an image that’s much less crisp and detailed than what 4K is truly capable of.

Like the Xbox One S, the PS4 Pro is also not always capable of displaying native 4K content – some games, such as Skyrim, will hit those heady pixel heights - but more often it too will be a case of upscaling on Sony's machine. At least with the PS4 Pro however, it is slightly cleverer with how it fakes it.

Each game handles its upscaling slightly differently, but a general theme so far has been that games will render at a resolution that’s between Full HD and 4K and then use a more advanced upscaling method called ‘checkerboard rendering’ to fill its 4K pixels.

When talking about checkerboard rendering things can get complicated very quickly, but the important takeaway from this is that the images the PS4 Pro is capable of displaying look very close in quality to native 4K content, which is a far cry better than what Xbox One S upscaling is able to achieve.

The PS4 Pro has given itself a big boost with the addition of its aptly named 'Boost Mode' in its 4.5 firmware update.

Going forward, most (if not all) games will support the Pro’s extra functionality, but it's good to know that the vast majority of the console's existing games can benefit too.

Aside from 4K, HDR is the other big recent development in image technology, and both consoles support it to varying degrees. With the Xbox One S the list is confined to games that have been specifically upgraded to support HDR and Ultra HD Blu-ray discs, whereas with the PS4 Pro most of the games that have a Pro mode should support it. The PS4 Pro, however, does not have a 4K Blu-ray player – but more on that in a little bit.

This means the amount of games that support HDR is currently much longer for the PS4 Pro than the Xbox One S.

On the audio side of things, however, the Xbox One S supports the latest and greatest surround sound technologies including Dolby Atmos. You'll need a premium audio setup to take advantage of it (check out our guide to the best soundbars for some recommendations), but if you want the best of the best, then the Xbox One S has the audio edge.

Of course, graphics are only important if you want to play the games in the first place, and although both consoles have a number of excellent exclusives, there's also a great deal of overlap in the games available.

Recently the Xbox One has seen some great exclusives come its way. We’ve seen the Gears of War series make a fantastic comeback with Gears of War 4, and Forza Horizon 3 has delivered some fantastic arcade racing action.

Xbox is also the home of the Halo series, and while the games haven’t been quite the same since development duties passed from Bungie to 343 Industries, Halo 5 was still an excellent shooter in its own right.

A final point in Xbox’s favor is that its backwards compatibility is currently in a far better state than the PS4. Although you can’t play every Xbox 360 game that was ever released during the console's 10-year lifespan, there’s an ever-increasing list of 360 games that will work on the Xbox One S.

Meanwhile the PS4 has a number of excellent exclusives of its own. These range from Uncharted 4, to Horizon: Zero Dawn, to excellent remakes of The Last of Us and the original Ratchet and Clank.

Where the PS4 is weaker in terms of exclusives is with its racing games. The Xbox One has several great entries in the Forza series, while the PS4 has had to make do with just a single (admittedly now quite good) racing title, Driveclub.

However, debating over specific releases aside, the vast majority of this generation’s biggest games have come to both consoles. Titanfall 2, Battlefield 1, Overwatch and Hitman have all appeared on both the PS4 and Xbox One this year, and going forward most third-party publishers are expected to support each console more or less equally (the occasional timed-exclusive or exclusive DLC notwithstanding).

If you want a full breakdown of the best games available for each console (exclusive or otherwise) then check out our guides to the best Xbox One games and the best PS4 games.

Xbox One S vs PS4 Pro films and media

Films and media is another area where the two consoles are similar in some respects, but very different in others.

The discs aren’t exactly easy to come by at the moment, but when a movie or TV show is available in the format, it’s well worth opting for the 4K version, and as time goes on the format is slowly going to take over in much the same way as Blu-ray has taken over from DVD.

When it comes to streaming, both consoles are on much more even footing, and are both equipped to handle Netflix, Amazon Prime and YouTube in all of their 4K/HDR glory.

Both video streaming and Ultra HD Blu-rays have their drawbacks. You’ll need to have a pretty meaty internet connection to get a good quality 4K stream (Netflix, for example, recommends a connection speed of 25mbits or above), and 4K discs are expensive and not available for the vast majority of movies and TV shows.

However, while they both have their drawbacks, the Xbox One S gives you the choice between them, whereas with the PS4 Pro your choice has been made for you by the lack of an Ultra HD Blu-ray disc drive.

Although we’d love for money to be no object when it comes to gaming, the reality is that for most people price is a significant factor in determining what to buy, and that’s especially true around the holiday season.

However if you don't want to wait, today's best Xbox One S and PS4 Pro details are listed below.

So which is better?

Ok it’s conclusion time, which means we’re going to have to draw the line on how the two consoles are currently stacking up against one another.

Both pieces of hardware have their strengths, and which console ends up being the one for you will come down to what matches your specific needs.

If you care first and foremost about 4K gaming, then the PS4 Pro has the edge right now. While the Xbox One S uses some pretty standard upscaling, the PS4 Pro uses some much more intelligent processes to make its games look very close to 4K.

As time goes on the list of Pro-enabled games is only going to increase and its Boost Mode has been a nice addition for existing games on the console.

The big advantage the Xbox One S has is its Ultra HD Blu-ray player. Many have argued that the future of home cinema is in streaming, and we’d be inclined to agree, but while the two major streaming providers Netflix and Amazon Prime Video already support 4K, you’ll need a pretty speedy internet connection to actually be able to see it.

As internet speeds improve this will be less of a problem in the future, but as it currently stands there are plenty of people out there who won’t be able to stream 4K content.

So there you have it. One excellent all-round media machine, and one 4K gaming console with a small (but growing) number of games that are actually in 4K.