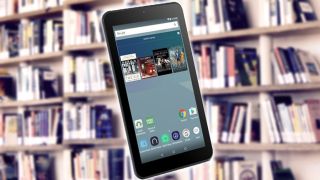 Hoping to power through your reading backlog this Thanksgiving weekend? You may be interested in Barnes & Nobles' newest Nook tablet, which comes out this Black Friday for an equally frugal cost of $49.99.

The Android-powered 7" Nook Tablet, set to debut November 25,  features a  1024 x 600 IPS display, 2MP front and 5MP rear cameras, 8GB of built-in storage, and can expand out to 128GB with a sold-separately microSD card - bravo to you if you can fill that much space out with just books, by the way.

Barnes & Noble tells us that the 7" Nook Tablet will be US-only, though that may be for the best, as the company already discontinued selling Nook content for UK-based devices back in March, passing the buck to Sainsbury's Entertainment - which in turn is discontinuing selling digital content itself this December.

Should you not already be beholden to Amazon's premium Prime service, the tie-breaker between the cheap e-books may simply come down to your preference in bookseller.