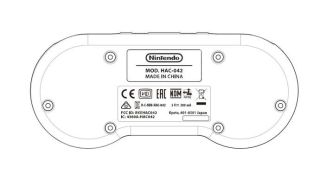 Good news, retro gamers: the Nintendo Switch looks to be getting a wireless SNES controller accessory, which would mean SNES games should soon be on their way to hit console.

An eagle-eyed poster – on forum site Resetera – found documentation for the SNES controller in an FCC filing, with a "HAC" model number that fits with the listing information used for the console and Switch accessories.

The majority of images in the filing are inaccessible until early February, 2020 – a likely launch date – though you can see an image of the back of the controller at the top of this article.

Given you can already buy NES controllers for the Switch, with NES games available to play through Nintendo Switch Online – it seems pretty certain that Nintendo is just biding its time until it starts flooding the Switch console with SNES games to play too.

So, what's all this fuss about the SNES?

The iconic Nintendo console – the Super Nintendo Entertainment System, to be exact – launched in the early 90s, as a successor to the NES. Upgrading the NES's 8-bit hardware, the new 16-bit console could cram in far more information for more vivid and ambitious gaming experiences.

It might pale in comparison to the average open-world game today, but hey – there are some real classics on this console, like Super Metroid, Star Fox, and Legend of Zelda: A Link to the Past.

Nintendo has released a number of mini consoles – the NES Classic Edition and SNES Classic Mini – for playing retro NES and SNES games on dedicated hardware, which sold out startlingly quickly.

Subscribers to the Nintendo Switch Online service can also play a select number of NES titles via emulation on the Nintendo Switch, and fans are eagerly awaiting the arrival of SNES games – if not GameCube and N64 titles too. We were hoping to see this happen before early 2020, but it's good to know when to expect it.