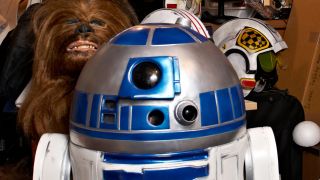 This is not the format you're looking for

It looks like Star Wars Episode VII is lining up to be a more old-school affair (that's IV, V, VI old, not Jar Jar Binks) with director JJ Abrams planning to shoot the next film on 35mm.

Boba Fett Fan Club reports that the film's cinematographer Daniel Mindel talked about the use of 35mm Kodak film for the new Star War film at a Los Angeles event this week.

JJ Abrams has always been one to stick to his traditional film methods and the director previously stated that celluloid remains the "best quality" option for shooting. This news might also reinforce word that George Lucas is taking a backseat for the film, given his ferocious love for digital.

We've got a good feeling about this.

Our blips have become more powerful than you can possible imagine