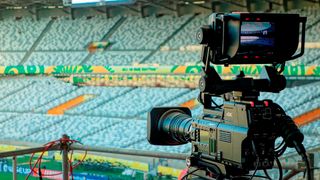 OFFSIDE or something probably

First it was 'highly likely', then it was 'confirmed', and now it has been double-confirmed: this year's football (soccer) World Cup will be filmed in 4K.

Well, some of it will - three games. Apart from the final, it hasn't been decided exactly which games will get the high-res treatment yet but at least one quarter final will be in the pot.

Unfortunately you may not be able to watch these matches in 4K at home even if you have a 4K-friendly TV - FIFA is currently touting the broadcast rights around and there's no guaranteeing who, if anyone, will get them.

But there will be some cinema screenings to show off the Ultra HD ball kicking action, and FIFA is also going to include the 4K footage on its official World Cup Film which will be released online when the tournament ends.