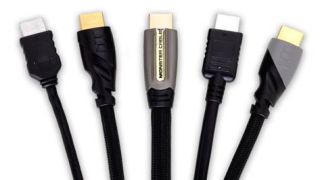 Everything you need to know about HDMI 2.0

The High-Definition Multimedia Interface (HDMI) was originally launched in 2002 to replace the ageing and bulky SCART connection.

HDMI has been through several iterations since then, the fifth of which is the newest version - HDMI 2.0. But what is it?

What does it do that the current HDMI connections on the back of your HD telly don't? Both of these questions (and more besides) are answered below...

Officially unveiled at IFA 2013 by the HDMI Forum, HDMI 2.0 is an improved standard for AV connectivity and the heir apparent to HDMI 1.4 (released back in 2009). You'll need an HDMI 2.0-compatible HD TV if you're interested in watching the full range of 4K Ultra HD source material in the future.

Yes it does. But there's a problem. As its name suggests, '4K' is four times the resolution of 1080p Full HD and it actually requires more bandwidth than the current HDMI 1.4 spec can handle.

HDMI 2.0 doesn't quite double the throughput of HDMI 1.4, but it ramps it up to 18Gbps. This enables a whole host of enhancements and features, which include:

Does this mean that HDMI 1.4 is obsolete?

Far from it. HDMI 2.0 is fully backwards compatible with HDMI 1.4 and it features the same 19-pin connectors.

That depends. You can use your existing HDMI cables with new HDMI 2.0 connections as the connectors themselves haven't changed. While there's no such thing as an HDMI 2.0 cable per se, displaying 4K at 50/60Hz will require a High Speed/Category 2 HDMI cable. You can pick one up for a few pounds/dollars online. Don't spend any more.

At IFA 2013, Panasonic launched its 65-inch Viera WT600 4K Ultra HD TV - the first to feature the new HDMI 2.0 specification. Now that HDMI 2.0 has been finalised, expect every new 4K Ultra HD telly scheduled for release in 2014 to include it.

Can I upgrade my current HD TV to support HDMI 2.0?

This isn't entirely clear. According to the HDMI Forum's website at hdmi.org, the official line is: "There are no provisions for doing such an upgrade. Because of the new enhanced feature set, any such conversion would require hardware and/or firmware upgrades."

But…There's an intriguing disclaimer: "If there are such conversions, [they] would come from the manufacturer." This opens up the possibility that some HDMI 1.4 connections could be converted into brand-spanking new HDMI 2.0 connections. Sony seems to be offering such an upgrade path. Its new X9 4K Ultra HD TV is listed on its website as "HDMI 2.0 upgradeable".

Doesn't look like it. All of the tech specs released for the two next-gen consoles thus far point to the PS4 and Xbox One shipping with the existing HDMI 1.4 connection. That said, if firmware and hardware upgrades are possible, there might be a way for Sony and Microsoft to provide a conversion option post-launch, as and when 4K Ultra HD becomes more established.

Is there an alternative to HDMI 2.0?

Yes. Intel's Thunderbolt 2 spec is faster - the throughput is rated at 20Gbps - and it supports DisplayPort 1.2. But the HDMI format is already firmly established on HD TVs and other HD-capable devices. So don't expect Thunderbolt to become a standard feature on future high-def and Ultra def tellies.

When is the HDMI 2.0 release date?

While the HDMI Forum officially released the spec on 4 September, any HDMI 2.0-equipped devices need to comply with the HDMI 2.0 Compliance Test Specification (CTS). And that's not finished yet. It is expected to be released at some point before the end of 2013.