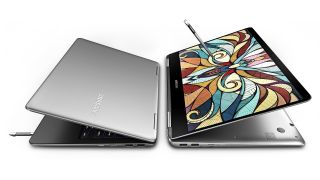 Update: Samsung revealed a pair of convertible laptops equipped with a built-in S-Pen at Computex and now they're available for pre-order starting today.

Samsung has announced a new pair of convertible laptops with the 13- and 15-inch Notebook 9 Pro, and they look a lot like Windows-flavored versions of the Chromebook Pro – which isn’t a bad thing.

The similarities between the Samsung Notebook 9 Pro and Chromebook Pro start immediately with the built-in stylus, rounded frame and convertible laptop form factor. These are all things we enjoyed about the Samsung Chromebook Pro, and we hope they’ve translated well to a Windows 10 device.

Samsung is aiming the Notebook 9 Pro at creatives, with a Full-HD 13- and 15-inch touch panels that work seamlessly with the built-in S-Pen.

The South Korean electronics firm claims its stylus can convey 4,000 levels of pressure through its 0.7mm tip. That’s just 96 levels of pressure short of the Surface Pen that comes with the latest Surface Pro, but unlike Microsoft’s digital stylus you never have to worry about the charging the S-Pen’s batteries, and it’s always on.

The stylus can be used with the pre-loaded Air Command software to take notes, edit documents, and draw. The S-Pen is also fully compatible with Windows Ink Workspace, which includes rulers, protractors and other virtual drawing tools.

Both models of the Samsung Notebook 9 Pro come outfitted with Intel Core i7-7500U processors, 256GB SSD, and an 54WHr battery with fast-charging features. Due to its larger size, the 15-inch model comes with some beefier specs, including an AMD Radeon 540 GPU for discrete graphics and 16GB of memory onboard, while the 13-inch variant has 8GB of memory.

These convertible laptops look promising, but we'll have to see how well the S-Pen handles compared to the new Surface Pen and Surface Pro in our new review.