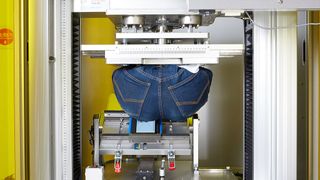 Deep inside Samsung's HQ in Suwon, South Korea, countless employees spend the better part of each day putting the company's latest handsets through a series of gruelling and wince-inducing durability tests.

Before a Samsung smartphone is able to reach the market, the electronics giant wants to make sure that it'll be able to withstand a significant beating and continue to function properly.

On a recent trip to Korea, we were invited by Samsung to take a tour of its dedicated testing facility, and as we made our way through the company's labs (each more diabolical than the last) we came to understand just how seriously the company takes its quality control – even if one of these tests does involve an undeniably quirky robot butt (dressed in blue denim jeans, no less) repeatedly sitting on handsets.

Crafting a dedicated robot behind is a concept that's perhaps a bit left of center, but it's also one that succinctly demonstrates Samsung's commitment to the testing of its products in real-world scenarios – and that butt's just the tip of the assberg.

There's plenty more going on in Samsung's Mobile Quality Test Lab, where phones are subjected to every test you can think of – from talking dummies which test call quality through to chambers that simulate extreme weather conditions. There was plenty of weird, wild and wonderful on display.

Get your thermals on

There aren't many professions where you can get paid for playing video games – despite the stereotype, that's not even the case for games journalists – but the team responsible for Samsung's Thermal Lab testing actually is tasked with playing games on various devices for extended periods of time (though general usage is tested, too).

During these intense gameplay sessions, the heat levels of those test phones and tablets are studied closely using advanced thermal cameras, with the images taken shown in a Predator-style heat vision on nearby monitors.

Testers are then able to view the images and pinpoint specific areas on a device, such as the battery or processor, which may or may not show some level of heat inconsistency.

During our walkthrough of the Thermal Lab, we witnessed real-time video game testing of an unspecified Samsung handset while it was being charged simultaneously.

In this case the phone's heat signature remained consistent across the entire device, with no specific area showing any signs of excess heat.

For many potential buyers, photographic capabilities are the most integral part of the decision-making process when selecting a new smartphone – and as such, it's become increasingly important for manufacturers to truly put their phones' cameras through rigorous development and testing.

In Samsung's Image Lab, new phones must go through a series of quantitative and qualitative camera tests under varying light conditions.

For quantitative testing, numerous pictures are taken to determine concrete data about a camera sensor's photo-taking capability. In these instances, resolution charts and Macbeth color charts are photographed to accurately record what the camera can objectively achieve.

Qualitative testing, on the other hand, is much more subjective. Testers are able to take countless images and personally offer opinions on their quality, including saturation, exposure and more.

It's that delicate balancing act between the two that gives photos a distinct appearance; one that aims for brightness and color accuracy while also attempting to improve the overall quality of a photo based on shooting conditions and the subject being photographed.

As expected, quantitative tests are performed using different light sources, including LED and fluorescent lights in both dimmed and bright rooms.

Meanwhile, qualitative tests are administered in a variety of environments including controlled indoor settings (such as faux-restaurants and living rooms) and simulated outdoor areas (complete with outdoor lighting and digital billboards to photograph).

One of the most impressive tests we witnessed involved the photographing of highly detailed miniatures, including buildings, trees and more. Using an elaborate machine, Samsung's testers were able to raise, lower and swap out various miniature structures on the fly, giving the testers quick access to a variety of environments without having to physically change rooms.

According to Samsung, roughly 50-100 photos are taken in each test, adding up to "tens of hundreds of test photos" when all is said and done.

Moving over to Samsung's Acoustics Lab, we were given some insight into the company's process for achieving optimal sound quality for microphones and speakers during phone calls.

The first room we stepped into was devised to simulate a concert hall, complete with instruments leaning against chairs and other objects.

Designed to carry sound across the entire room, the concert hall simulation is used to test spatial impression, reverberation and other factors that could affect the quality of a phone call.

Just like with the Image Lab, a living room setting is also available to test the quality of a phone's calls in a more average and likely environment.

Of course, it's also imperative that the phone's mic and speaker quality be tested in an extremely quiet environment, which is why Samsung has also set up a noise absorbing anechoic chamber.

Stepping inside this room is an unnerving experience (and not just because the walls are covered in cheese wedge-shaped sound absorption panels), with the absence of any kind of echo making it feel like you're standing inside a pair of noise cancelling headphones.

In this room, we found ourselves standing beside a life-size talking dummy with a phone strapped to its head. The dummy proceeded to speak into the device in several different languages as testers listened in on the call from outside the soundproof room. This was done specifically to test the call's sound purity.

The next acoustics test we observed was held at the other end of the audio spectrum: a noise-filled room that was set up to simulate a loud outdoor environment.

Next on our tour was the most perversely-satisfying lab testing environment: the Drop Test lab. Yes, it's exactly what it sounds like – and for some reason, we really got a sick thrill out of seeing expensive handsets take some serious punishment (so long as they're not our personal handsets, of course).

Using a number of different mechanical devices that look like the world's most brutal skill testers (including auto drop testers, tumble testers and continuous free fall testers), Samsung's handsets are repeatedly dropped from varying heights and angles onto a variety of hard surfaces, such as metal and marble.

During our tour of the Drop Test lab, we personally witnessed a Samsung Galaxy S9 being dropped onto a hard surface from a height of approximately one meter at least half a dozen times.

While the phone itself appeared visibly scuffed up, somewhat surprisingly, its screen and frame remained completely intact. That said, we have no way of knowing whether the device was still fully functional after so many falls – the testing chamber was sealed, so we didn't get to see the phone switched on.

After one particularly bad-looking fall, Samsung's testers showed us a super slow motion video replay of the impact that was captured on a high-speed camera. Landing directly on one of its corners, the device bounced a few inches into the air before landing flat on its back.

Nearby, a more specific automated testing machine saw a handset repeatedly dropped down a set of Stairmaster-like steps so that the company could accurately record how a phone might be affected by a continuous short-range tumble.

We asked Samsung's testers how many times a single device is put through the drop testing process, and while they were unable to reveal an exact number, we were told that each dropped phone is tested "numerous times."