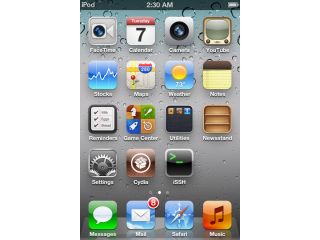 The iOS 5 jailbreak has started

Apple's new iOS 5 software has only been available for less than 48 hours, but already it appears to have been jailbroken.

MuscleNerd, of the iPhone Dev Team fame, has posted pictures of an iPod touch running the new iOS 5 platform, complete with Newsstand and Reminders, but also offering the Cydia store, for access to apps designed for jailbroken phones.

The exploit is reportedly completed using the limra1n exploit created by noted hacker GeoHot (who you might remember from the recent Sony PS3 court case) and while it's great to see such speed in getting the iOS software jailbroken, what we're seeing is very early stages at the moment.

Work to be done

For instance, the exploit still has to be tethered, which means users will need to be connected to a PC every time they reboot, and there's no word on when or if the jailbreak will work on an iPad or iPhone as yet.

However, with months to go before the iOS 5 release date, the Dev Team has plenty of time to perfect the hack (which isn't illegal any more in the US) so if you're after a more open iPhone before Christmas, this could be good news for you.

Check out T3's video of iOS 5 from WWDC.