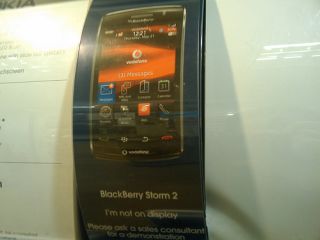 The BlackBerry Storm 2 outed in The Carphone Warehouse

The forthcoming BlackBerry Storm 2 handset is set to launch in the UK in the near future, and new photos seem to back that up.

An eagle-eyed photographer snapped an early display showing off the phone in The Carphone Warehouse and posted it onto Twitter, although it's just a pre-promotional picture at the moment.

There's not a lot else known about the new BlackBerry Storm 2 right now, other than it will have 18GB onboard storage (16GB memory card, 2GB inbuilt) and will run the latest BlackBerry OS.

But thankfully a training video has emerged on the internet detailing the device, so check it out for yourself to learn all about the new Storm.

The good news is that typing is set to be easier on the new Storm after the failure of the original, and RIM has taken the phone back to the drawing board and made it a lot faster too.

We're looking forward to checking out the latest model later this year, especially after we were left so disappointed by the original Storm – can RIM make a keyboard-less BlackBerry work?

Via Pocket-lint and Engadget