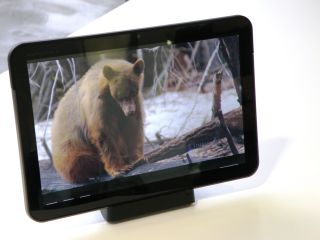 The Motorola Xoom is the first device to get the new Android 3.2 upgrade

Late on Tuesday a small percentage of Xoom owners started to report the Android version upgrade had appeared on their device, so it looks like Google is aiming to trickle this one out slowly.

At present, only users of the Wi-Fi Xoom have been blessed with the new software so its difficult to predict when the rest of the pack will catch up.

Zoom for the Xoom

Android 3.2 brings a few minor improvements including the new zoom feature, which will allow users to make smartphone-optimised apps appear full-screen, in the same way the iPad upscales iPhone apps.

The new version of the OS also brings Honeycomb compatibility for the smaller 7-inch Android tablets like the first iteration of the Samsung Galaxy Tab.

Other improvements include better widgets for the Music, Movies and Movie Studio apps, faster hardware acceleration and better support for SD cards.

The Android 3.2 update is believed to be one of the last incremental updates before the new Ice Cream Sandwich operating system arrives to save us from pesky Android fragmentation and get us all on the same page.