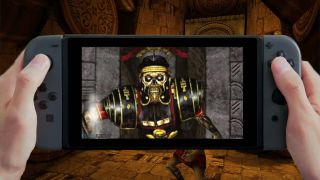 The Nintendo Switch is only weeks away, and in the lead up to its much-anticipated launch on March 3, the company’s deputy general manager, Yoshiaki Koizumi, has coyly responded to rumours about whether it will get access to GameCube games via Virtual Console — a first for any Nintendo system.

When questioned about the possibility by the French publication Melty, Koizumi stated, “We can not really answer with precision [about GameCube Virtual Console titles on Switch] because we have not announced anything about it at this time.” He continued, “What I can tell you is that we are working on things that go in that direction.”

In response to the suggestion that using Joy-Con controllers to play GameCube games might work well, Koizumi said “the technology is open enough that in the future, other accessories will be added to the console.” Koizumi teased that if this were to happen, they’d want to bring analog triggers into the mix, though that “might be a bit big and ugly.”

It’s also been previously suggested that the Nintendo Switch could one day work with your old controllers, so maybe hang on to that old WaveBird wireless controller, just in case.

Though not a confirmation by any means, Koizumi’s carefully-worded responses do seem to indicate that GameCube games will be playable on the Nintendo Switch at some point in the future. Whether this will be in the form of a traditional Virtual Console section for GameCube games, or with remastered versions of the system’s greatest titles, is anybody’s guess.

In the meantime, we’ll be quietly hoping that such GameCube classics as F-Zero GX, Viewtiful Joe, Eternal Darkness, Wave Race: Blue Storm and Super Mario Sunshine will make their way to the Switch.