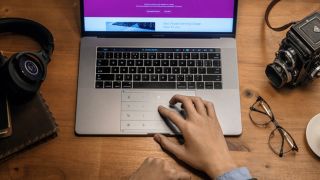 Number pads are handy in computing, but when it comes to laptop keyboards, there’s rarely space for them – heck, even some desktop keyboards (tenkeyless) do away with them these days. However, a new Kickstarter is offering a nifty innovation on this front by bringing number pad functionality to the MacBook.

Or more specifically, to the MacBook’s trackpad. Nums is essentially a thin sliver of glass which is crafted to fit exactly on top of your MacBook’s trackpad, and it’s overlaid with a full number pad grid – including a host of extra calculator buttons.

Once fitted on the trackpad, you just need to install and fire up the companion app, then you can use the full range of number pad functionality. Plus the good news is that the glass film (which is 0.26mm thick) doesn’t affect the normal use of your trackpad.

In fact, it actively protects the trackpad, being a scratchproof material.

Furthermore, there’s an added bonus in the ability to customize the individual ‘keys’ to launch certain apps, favorite websites and activate keyboard shortcuts.

Light in the darkness

It’s also worth noting that the symbols on the Nums glass use metallic ink, allowing them to reflect the light from the screen so they’ll show up even in a dimly lit environment.

Is this the sort of innovation that might inspire Apple regarding its next line of MacBooks? Hey, it's happened before; just look to the Touch Bar and then back to Lenovo's 2014 ThinkPad X1 Carbon.