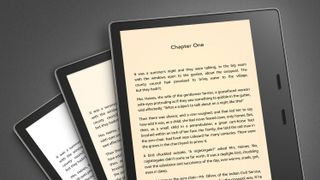 The Kindle Oasis was already one of the best ereading experiences on the market, but a newly refreshed version of the top-end ereader now comes with a feature many have been calling out for.

The Kindle Oasis 2019 comes with an adjustable warm light that allows you to change the color tone of the screen, which is used to give you a more comfortable reading experience at night.

Update: Amazon has now clarified that the new Kindle Oasis features an upgraded E Ink technology that can help the page load quicker and the battery is slightly bigger too at 1130mAh compared to the last-gen device's 1000mAh.

In a press release, Eric Saarnio, Head of Amazon Devices EU, said "We're adding an adjustable warm light so customers can read with a warmer tone that's customizable to their preference to easily transition from daytime to nighttime reading."

It's a feature that has felt missing from previous versions of the Kindle Oasis as you've had to fiddle with the brightness at night and even then it can be difficult to read in the dark.

Otherwise, it's still the same 7-inch, 300ppi E Ink display that we've seen on previous versions of the Kindle Oasis. The design is the same too, with color options restricted to Graphite or Gold.

That design is IPX8 waterproof meaning you'll be able to get this wet when you're sat near a pool or in the bath, but we wouldn't push it any harder than that as it's only able to handle 2 meters of the wet stuff for 60 minutes at a time.

Other specs include 8GB of storage on the standard version, but if you want to include audiobooks (which you can listen to over Bluetooth) you may want to opt for the 32GB variant.

How much does the new Kindle Oasis cost?

You can pre-order the new Kindle Oasis from Amazon's website today, but it won't arrive in your hands until July 24 so there is a bit of a wait until this is released.

Rumors suggest Amazon Prime Day is taking place on July 15, so that may mean we see a discount to the existing Kindle Oasis but you shouldn't expect a price cut on this latest version.