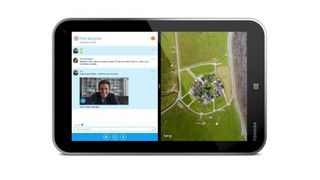 It makes a great second screen for Xbox

Now that the Xbox One has hit Australian shelves, gamers all over the country are beginning to discover the benefits of the next generation of gaming consoles.

One of those advantages is Xbox Smartglass, the second screen functionality that allows you to use a tablet to control your console.

To give gamers a closer look at the power of Smartglass, we've partnered with Toshiba to hold an exclusive, intimate event that will combine the power of the Xbox One with the new Toshiba Encore tablet to demonstrate the benefits of a Smartglass ecosystem.

The best news is that we want our readers to experience the benefits first hand.

There are 10 double passes available for the Sydney-based event on the early evening of December 11. Not only will you and a friend get to experience the Toshiba Encore tablet in action as a Smartglass device while playing Dead Rising on an Xbox One, but you'll also get to enjoy food and drink and go in the running to win your very own tablet on the night.

Thanks for your entries, this competition is now closed.

Please note that this competition is only open to Australian residents 18 years and over.