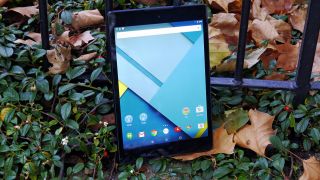 All the Nexus focus right now is pointing toward the new phones – the Nexus 6 2015 rumoured to be made by Huawei and the Nexus 5 2015 reportedly built by LG.

Speculation about a new Nexus tablet has also started with the "Nexus 8" appearing in the GeekBench 3 benchmarking software.

According to the specs detailed the tablet will have an octa-core 1.3GHz CPU suggesting it'll be a MediaTek processor this time rather than a Snapdragon version.

The benchmarking reveals it's currently running on Android 5.1.1 software but we'd expect it to be running Android 6.0 Marshmallow when it actually launches.

At the moment there's no hint who will be making the device – it's usually the same company that makes the phone, so we'd predict it's going to be either Huawei or LG.

Both manufacturers have history with tablets and have created satisfactory devices before; maybe being part of the Nexus program will push one of them to glory.

Benchmarking tests can be fiddled with so this may all be an elaborate practical joke but the last three years have seen Nexus tablets released alongside phones, so there's every reason to believe a new Nexus slate is coming.