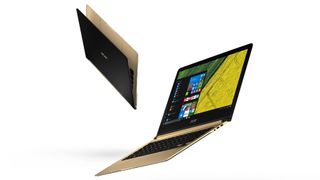 Acer has revealed some tasty-looking new laptops, one of which is the most slender notebook ever produced – the first in the world to measure less than 1cm thick – along with a convertible that utilizes a 360-degree hinge for the ultimate in flexibility.

As mentioned, the Acer Swift 7 is the first laptop to dip under the 1cm barrier, Acer notes, with the device measuring 9.98mm – which is getting down to tablet-like levels – and unsurprisingly it doesn't weigh much either at 1.1kg.

It has an all-aluminum unibody chassis with a rather smart looking black and gold color scheme, and the Swift 7 boasts a 13.3-inch IPS screen with a full HD resolution (1920 x 1080) fashioned from Gorilla Glass.

Spec-wise, this might be a lean machine, but it's mean enough in terms of power with an Intel Core i5 Kaby Lake processor on board backed by up to 8GB of system memory and a 256GB SSD.

In terms of connectivity, there are two USB 3.1 ports and 802.11ac Wi-Fi with MU-MIMO (router technology which allows for a better connection when using multiple devices wirelessly).

As for battery life, Acer claims you get up to 9 hours with this model.

The Swift 7 is the premium offering, but there are others in the range which weigh in with cheaper price tags.

The Swift 3 will be a more reasonably priced 14-inch notebook with a full HD or HD screen and either Intel Skylake or Kaby Lake processors, and the same as the above laptop in terms of RAM/SSD. Its battery will last you 12 hours and there's also an integrated fingerprint scanner.

Finally, the Swift 1 is the budget option and again comes with a 14-inch display, driven by an Intel Pentium or Celeron processor, 4GB of RAM, with the base model having 32GB of eMMC storage (rising to 128GB maximum).

Moving on to the hybrid offering, the Acer Spin 7 benefits from a 360-degree hinge so the screen can be flipped back partway to be used in 'tent' mode, or all the way so it's flat to the underside of the keyboard to allow the device to be used as a tablet.

The Spin 7 is also very thin at 10.98mm, and it weighs 1.2kg, fitting a 14-inch IPS Gorilla Glass display with a full HD resolution into a 13-inch all-aluminum chassis.

As for the components, a Core i7 Kaby Lake processor is running the show alongside 8GB of memory and a 256GB SSD, and as with the Swift, there's a pair of USB 3.1 ports on board.

You also get a roomy glass touchpad which is apparently smooth and responsive to use, and up to 8 hours of battery life.

Again, just like the Swift laptop, Acer is producing Spin 5, 3, and 1 models to complement this high-end offering.

Deep breath – the Spin 5 boasts a 13.3-inch full HD touchscreen with an optional stylus (Acer Active Pen), and a Kaby Lake CPU with up to 16GB of RAM and a 512GB SSD. It delivers up to 10 hours of battery life.

Acer's Spin 3 goes with a larger 15.6-inch display (HD or full HD) and plumps for a Skylake processor with up to 12GB of system memory. In terms of storage there are twin drives – up to 256GB SSD and 1TB HDD – and there's a backlit ergonomic keyboard, with the machine boasting up to 9.5 hours of battery life.

Finally, the budget Spin 1 is targeted at students and comes in either 11.6-inch or 13-inch flavors, with Intel Pentium or Celeron processors, plus it supports the aforementioned stylus. Battery life is up to 9 hours.

The Swift 7 and 3 are due to arrive in October, with the Swift 5 turning up the following month. In the case of the Swift 1, that's also out in November in the US, but will be available come October in Europe.

Get the best Acer Swift 7 deals before anyone else!

We'll send you pre-order details and the best Acer Swift 7 deals as soon as they're available.