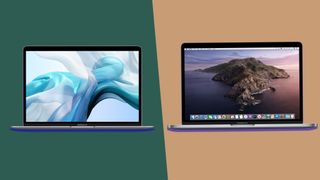 Trying to decide whether the MacBook Air 2019 vs MacBook Pro 2019 is the best computer for you? Then you’ve come to the right spot.

This year’s models of the MacBook Air and the MacBook Pro are now out – with the 16-inch MacBook Pro well on its way. And, both bring fresh features to the old favorites, even if both designs of the laptops stay the same.

Despite sharing similarities, including Apple’s stylish design ethos, the MacBook Air and the MacBook Pro are intended for very different users. The MacBook Air is the entry-level Mac, and the most economical way to get one of Apple’s laptops. Because of this, it’s aimed at casual users for daily tasks such as creating documents and browsing the web.

On the other hand, the MacBook Pro is Apple’s most powerful laptop and is aimed at professionals. That means it’s rocking cutting edge components – and a steep price tag to match.

So, which one is best for you? We pit Apple’s latest and greatest laptops against each other to find out.

As we mentioned earlier, the MacBook Air is Apple’s most affordable laptop. Though that doesn’t mean it’s cheap, if you’re set on an Apple laptop and are on a budget, then this is the one to get.

It’s far from budget, but it’s a heck of a lot more affordable than the MacBook Pro (2019).

If your budget can stretch to it, we advise getting the MacBook Pro over the Air for the quad-core processor alone.

If being economical is the most important thing to you, then the MacBook Air (2019) is definitely the ideal choice. If you’re after high performance, then it’s definitely worth it to spend more and get the MacBook Pro (2019).

So, the MacBook Air has the edge when it comes to size and weight – though the difference isn’t quite as big as you’d think. Apple has done an excellent job of making the MacBook Pro 13-inch impressively thin and light as well. This means that if you’re after more power, you’re still getting a very portable laptop with the Pro.

One of the most noteworthy changes to the MacBook Air (2019) is that its display now boasts True Tone technology, brining it in line with the MacBook Pro 13-inch (2019).

True Tone automatically adjusts the color temperature shown on the screen based on the ambient light. It can do a good job of making colors look more natural – especially in some conditions.

If you want color accuracy, however – if you’re a photographer or video editor, for example – then you’ll probably want this feature off, which you have the option to do.

The screens of the MacBook Air (2019) and the MacBook Pro 13-inch (2019) are very similar in other respects. They are both 13.3-inches, with LED backlighting, IPS technology and a native resolution of 2,560 x 1,600. That results in a pixel density of 227 pixels per inch on both screens, leading to them looking incredibly sharp.

However, the MacBook Pro’s screen does have the edge thanks to it being much brighter (500 nits), and it also supports the wide color P3 (also known as DCI-P3). This means the screen is able to show far more colors, and dramatically boosts the color accuracy of images on screen.

P3 is an industry standard for movie production, so if you’re a professional, then the MacBook Pro’s screen is the clear winner. However, the MacBook Air (2019)’s screen is also fantastic, and with True Tone, it’s better than ever.

The MacBook Pro 15-inch (2019)’s screen is a further step up, with a 15.4-inch size and a resolution of 2,880 x 1,800. This resolution over a larger size leads to a slightly lower pixel density of 220 pixels per inch, but the display is still bright and vibrant. Like the 13-inch model, it also boasts 500 nits brightness and P3 support.

All three 2019 models have somewhat improved keyboards. You may have heard that Apple has come under some criticism regarding the keyboards of previous MacBooks. The ‘Butterfly’ switch Apple uses for the keyboards has been prone to issues – including keys getting stuck or becoming non-responsive.

For the 2019 models, Apple has tweaked the materials used with the Butterfly switch, and the company promises that this should diminish the likelihood of the keyboards becoming faulty. While this is appreciated, many people had hoped that Apple would ditch the Butterfly switch altogether and introduce a completely overhauled keyboard.

Apple’s Keyboard Service Program, which will replace a faulty keyboard free of charge, extends to this year’s MacBook Air and both sizes of the MacBook Pro – which suggests the issue is still persistent.

Nevertheless, during our time with all three devices, we did not come across any issues with the keyboard. Hopefully Apple’s tweaks have really done the trick this time.

Meanwhile, both the MacBook Pro 13-inch and 15-inch 2019 models now boasts the Touch Bar, a thin glass touchscreen that runs along the top of the keyboard, offering context-sensitive buttons on its 2,170 x 60 resolution screen. These buttons change based on the application or task that you’re performing, and are intended to give you quick shortcuts for a more seamless workflow.

The MacBook Air (2019) doesn’t have this, but it does have a Touch ID fingerprint sensor (as do both Pros) for logging in and paying for things online securely and more effortlessly.

So, which of the 2019 MacBooks should you invest in? If you’re on a budget and want the most affordable laptop, then the MacBook Air (2019) is the one to get. Even though it’s the cheapest MacBook, you’re still getting some of the best and latest features to grace modern MacBooks, including True Tone and Retina technology in the display and the Touch ID fingerprint scanner.

On the other hand, if your budget can stretch further, the MacBook Pro 13-inch (2019) is absolutely worth it. The more powerful components – including a quad-core processor – makes a huge difference to the laptop’s performance, with the macOS operating system feeling a lot faster.

It’s also not significantly pricier than the MacBook Air (2019). Plus, while it’s not quite as thin and light as the MacBook Air, it’s not far off either. That means you’re not sacrificing too much in the way of portability and price for more power.

However, if you want the most powerful laptop Apple has made – something that can handle intensive tasks like video rendering and 3D modelling – then the 15-inch MacBook Pro (2019) is worth considering – though you’re going to pay more for it.