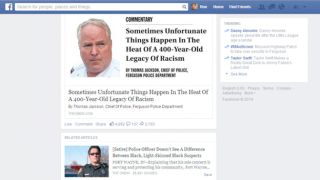 They say "sarcasm is the lowest form of wit" and by 'they' we mean people who're unable to master it, because, clearly, sarcasm is awesome.

However, for those poor souls who just don't get satire and tend to explode with outrage (we all know one) whenever they stumble upon an article from The Onion, Facebook has a solution.

ArsTechnica has noticed Facebook dealing a crippling blow to the art by placing a 'satire' tag next to satirical articles, when they're shared on the social network.

The company admitted it is testing out the notification, which places the word in brackets in front of links from satirical websites, which does indeed include The Onion.

As Facebook is only testing the feature right now, it's by no means a lock to roll out to everyone.

However, does satire remain satire if it's labelled satire? Is Facebook really going to the art to aid the vast minority who don't appreciate it? Does Facebook think its users are stupid? Share your thoughts below.