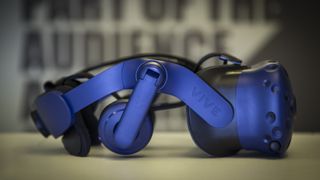 The HTC Vive Pro raises the game for virtual reality in terms of screen resolution and fidelity, but it also raises the price. If you're looking to get involved with Vive VR for the first time, a new HTC Vive Pro Starter Bundle pack could be just what you're after.

Though originally billed as an upgrade unit for existing Vive owners, the demand for the new high resolution Vive Pro unit has necessitated the need for a whole new bundle for the Pro, including all the controllers and motion trackers you'd need to get up and running.

So, for $1099 / £1048, you're getting the headset, two Vive 1.0 controllers and two 1.0 basestations. That's still a pretty penny, especially when you factor in the need for a high-end PC to make the most of it, but still the most simple and cost-effective way of jumping on the new Vive wagon from scratch.

As there's a significant saving to be made by picking up the bundle as opposed to the headset alone if you were purchasing it as an upgrade over the original Vive, HTC will be softening the blow for existing purchases. If you've already picked up a HTC Vive Pro headset before the bundle was announced, you'll be able to claim a $100 / £75 Viveport voucher, as well as bagging a full year's Viveport Subscription.

If that all sounds a bit too expensive regardless, you can still pick up the original Vive, which has had its price slashed to £499/$499.