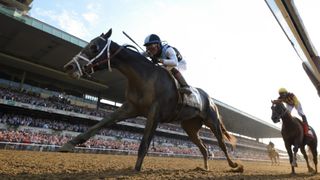 It's that time of year again for The Test of The Champion race, aka the Belmont Stakes, to descend upon New York. This will be the 150th time the event has taken place since its inception making Belmont Park in Elmont, New York, the centre of attention once again.

The Belmont Stakes is one of the most attended horse races of the year and pulls in huge TV audiences sometimes with over 20 million viewers. And we'll tell you ow to get a Belmont Stakes live stream from anywhere with no trouble whatsoever.

The thoroughbred racing should be very exciting this year, as always, thanks to that 1.5 mile track which makes for one of the longest Triple Crown races in the US.

Unbeaten Kentucky Derby and Preakness Stakes winner, Justify, is set to smash records. The horse has already been working a smooth five-eighths of a mile in 1:01.40 five days before he tries to make history in the 150th Grade 1, $1.5 million Belmont Stakes. His trainer Bob Baffert, who trained American Pharoah in 2015 to be the first Triple Crown winner in 37 years, is seeking to join "Sunny Jim" Fitzsimmons as the only ones in history to train two Triple Crown winners.

Another horse to watch out for, Restoring Hope, had his final major preparation for the Belmont Stakes, working three-quarters of a mile in 1:13 under jockey Florent Geroux, who will ride him in New York.

Here's how to live stream the Belmont Stakes action from wherever you are.

How to watch the Belmont Stakes 2018: US live stream

The Belmont Stakes for 2018 is getting full coverage on NBC. So if you have access to that via your cable connection then all you need to do is flip over to the right channel. You can also access the live stream via the NBC Sports Live website.

If you're out of the country and want to access the NBC US live stream, then we'd recommend using a VPN.

1. Download and install a VPN
If you don't have easy access to watch the 2018 Belmont Stakes in your country, the best way to watch it is to download and install a VPN. We've tested all of the major VPN services and we rate ExpressVPN as the absolute best. It's compatible with all of your devices, supports most streaming services and ranks amongst the fastest. You can even install it on devices like an Amazon Fire TV Stick, Apple TV, Xbox and PlayStation. So for a one-stop shop, you can't go wrong with Express - but there are more fantastic VPN options out there as well:

2. Connect to the appropriate server location
Simply open the VPN app, hit 'choose location' and select the appropriate location - it's super easy to do. So if you're looking for that NBC stream, just select a US city as your location.

3. Go to the broadcaster's website
This year's Test of The Champion will be streamed right on NBC's website in the US, for example. And with a VPN you can watch it live from anywhere in the world - just so long as you have those crucial cable log in details.

How to watch in the US without cable

If you don't have a cable subscription, fear not, because there are other options that will allow you to watch NBC without having to subscribe to it. To make the entire process simple for you, we've listed three of our favorite options below:

How to watch the The Belmont Stakes 2018: Canada live stream

While NBC is taking care of the race coverage in the US, you'll struggle to get coverage in Canada. As a result you'll need to take to the interwebs to find a feed of all the action.

fubo.tv will air the races live. You'll need to sign-up to access the content but there is a free trial so this is a great way to watch just this event for free.

Another option is to get yourself set up on a VPN service and access the NBC feed through that method.

How to watch the The Belmont Stakes 2018: UK live stream

Since you can't access NBC on your TV in the UK, your best bet to watch the race – where you may well have a bet – is to get online. We haven't found any sign that it will be broadcast in the UK by a regular broadcaster,

So instead using a VPN is the way to access the content as if you were in another country using the domestic coverage of the horse racing.